The Importance of Teaching part 1: why every government only wants us for our bodies, not our brains 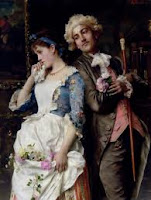 Education gets so much attention from a succession of lusty, tongue-tied ministerial suitors that I think they fancy us. And who can blame them? We're gorgeous.

Why is it that the education sector gets groped, man-handled and thrown against the barn door more than, say transport or agriculture (although those blushing beauties don't have long before their dance cards are filled too)? Why does education get all the love letters, the ministerial flirting, the protestations of love and devotion, the flowers, the promises, that this time, things will be different...? But it's not long before they reveal their true colours; once their names are above the doors, the candlelit dinners are a thing of the past, and before you know it, we're expected to have dinner ready on the table as they rock in whenever they fancy, reeking of port and agreeable dining. Ah, l'amour.

I've been reading the White Paper this week- who hasn't? It's like the latest Stieg Larsen; if you don't know how it ends then nobody will talk to you in the staffroom. And I've been looking for a way into writing about it, but every time I thought of an approach, I kept thinking, 'No, that's not it- there's too much to chew over.' So I've decided, not unlike a kid with a time-out card, to 'give it space to breathe'. I'll post on different aspects of it at different times. Sometimes it feels like writing a travel guide to Asia- there's just too much in it to do justice to all at once.

I wanted to write today about a broader idea, which I have raffishly alluded to via the tortured metaphor of the 'maiden defending her honour' meme: the extraordinary attraction Education holds for reformers and future incumbents to the keys of power. It doesn't take much analysis to bring to mind the popular Jesuit refrain, 'Give me the child and I will give you the man.' This, like any piece of intuitive wisdom, is so obvious that it barely needs stating, but upon analysis reveals depths beyond the obvious. The idea that the effects of childhood are the precedents that give birth to the antecedents of adulthood lead somewhat mundanely to the theory that we are products, at least in some ways of our histories. So far, so bleedin obvious.

This is where t

he Big Dogs of politics pick up the scent. They can smell opportunity where none exists (see: Duck Houses; moats), and recognise a chew toy when they see one. There is no state sector so amenable to radical reform than education; no other area of civil life where so much can change so quickly. Why? Because children, unlike adults will tolerate unusual amounts of upset to their routine without complaint, largely because they have no frame of reference against which to contrast and compare their experiences. In other words, they're much better at doing what they're told than adults.

And, the effects of revolutions are felt much less quickly in education than in other areas; the consequences of a change in policy can take a generation before the wheel turns and the outcomes are known. Therefore any change seems much less radical than it actually is. The introduction of TAs, the disparagement of phonics, an emphasis on skills over content, all of these policies may cause disagreement at first, but the sky remains firmly unfallen upon their introduction. It's only with the liberty of perspective that we can assess the impact on millions of children. Poorly thought educational reforms are the political equivalent of leaving a dead rat underneath someone's floor boards: you can only smell it months later.

There's a third reason, and it's one that is discussed constantly, but rarely explicitly; the aims of education. Because although you'll rarely see this topic considered openly in the newspapers, your attitude towards education's aims will ultimately decide what you think education should do. What is education for, after all? What is it we are hoping to achieve? It's a far from obvious answer, and the philosophical differences in approaches lead to huge practical differences in outcome. For example, is education meant to...


The list goes on. The temptation to say, 'Well, a bit of all of these,' might grip us, until upon reflection we see that some of them exist in tension with the others, in the same way that a hungry fox exists 'in tension' with a coop of nervous chickens. Ministerial aims are often so glibly expressed in the opening statements of policy documents that our brains, in order to stave off narcoleptic shut down, glaze over until we get to the less rhetorical portions. But they are important to winkle out of any White Papers, even if the authors themselves are only barely aware of their 'hidden' values, the assumptions they make about human nature and the purpose of society, and the role of the state.

Because that is what these reforms- and any reforms- are inevitably about. They are never just a fix for this problem or that. That's management. No, a brace of new policies, especially when accompanied by a clear-out at the top seat, expresses an ideology which finds arms and legs in the legislation it inspires.

And that's why this White Paper, like its ancestors before it from Baker, Morris, etc is so important: education is the key area of reform where political philosophy can be divined, like the entrails of a goat in the hands of a soothsayer ('Sooth! I say'). Schools, unfortunately, are the testing laboratories for ideology in a way that would never be tolerated by surgeons or drivers. Can you imagine a surgeon being told by a (non medically trained) Whitehall gonk that he was holding his scalpel the wrong way, and if he wanted to be graded as 'Satisfactory' in the Hospital review then he should try holding it between his elbows? I suggest not. Put two pounds on a litre of petrol overnight, and overnight there'd be a by election that reached from Orkney to Brighton.

But schools? Kids? The o