A heartbreaking work of staggering genius: review of the Behaviour Guru in the Times Educational Supplement this Friday 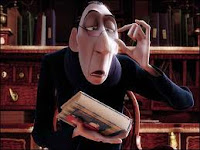 snowy wastes a lone carrier pigeon made it to me from the offices of Red Lion Square; as I fed it hot chocolate and rubbed warm linseed oil into its dorsal feathers, it told me that The Behaviour Guru will be reviewed in this Friday's Times Educational Supplement.

It's a strange thing to contemplate. It has been, I am happy to say, an undiluted joy to see one's name on the jacket of anything with pages. But like Moses, you haven't reached the Promised Land by any stretch. Because during the process of writing a book, it feels like you're writing for yourself, even a humble teacher manual. I think you have to do this; if you write to please anyone other than yourself, at least initially, then you might as well get someone to ghost it. Steven King calls this 'writing with the doors shut'.

Then you polish it; then you get a critical friend to read it, and you brace yourself for the result. It's like being one of those people in the first few rounds of the X-Factor. You see them every year; unqualified no-hopers who have clearly been singing into their hairbrushes while looking at themselves in the mirror, some of them for years. Then they step on stage, into the lights, and they sing something- usually 'their' song, one that means everything to them, usually an obscure Barbara Streisand album track that even she wouldn't remember. And they sing like they're pouring their hearts, their entire life out onto the stage. And it's rubbish.

The camera cuts to the orange, talent-free 'judges' (Amanda Holden judges anything. Is there a Nobel Prize for irony?) who look like they've been asked to swallow Gillian McKeith. Cowell exhausts his by-now empty barrel of ripostes, and the rising star becomes a meteor, shattered and destroyed. What I find most amazing (and tragic) is the look of sheer bewilderment some of them wear- they genuinely can't believe it. Some of the more comic car-crash entrants cheerfully F and cuss for the camera. If we're lucky, the more belligerent talent-vacuums chuck a punch before they're pulled off by the X-Bouncers.

g with the door open. Having your work read by others, and especially by someone in the trade; someone who commissions writing, especially if you respect their opinion. I'm sure the pros don't feel like this. I bet Christopher Hitchens hasn't pressed 'send' recently and thought 'I hope the editor likes this, crikey.' Well I do, and I suspect I will for a while. Even when I'm writing on the TES Behaviour Forum, there's a small voice that always says 'Have you checked that?' It's a good thing, I suppose, given that my first drafts are always so miserably rendered, peppered with spelling and grammar that I would shred were I to find them in one of my student's essays. Reading the works of others always helps keep me sharp; fantastic bloggers (like oldandrew), and fellow forum correspondents (particularly YesMrBronson, who is the sergeant major of syntax and spelling on the forum, but never less than sharp and intelligent).

Ultimately, I think that if you write primarily for any other reason than the desire to write, then you'll lose your way quicker than Theseus without wool. We don't write for money (Ha!) or glory (I have a growing email-bag of mentalist hate-messages to testify to that) but because we love to write and we have something that we want to share with others that we hope might be valuable- not helpful, or useful, but valuable. And that means saying what you believe, because nothing else is worth a damn, and nobody ever cared about what you said if you were just repeating what you thought people wanted to hear. There's nothing else.