'I sense a presence'. Oh really? The myth of teacher presence. 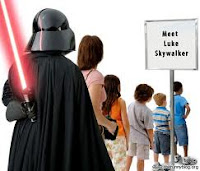 I answered a question on the forums today from a teacher who had been told, as many have been, to work on their presence. I've heard this mythical beast alluded to so many times, I thought I'd copy it here. This was my reply:

'Thank goodness they advised you to work on your presence; for a second I thought they were going to be vague.

You are right to feel confused by this 'advice'- it's like being told to work on your charisma or your wisdom. Why? Because it's a quality that refuses quantification; it's a nebulous, subjective characteristic that exists in the mind of the perceiver, not some mystical miasma that you excrete like marsh gas.

To say someone has presence is to describe OUR relationship with that person; or OUR reaction to that person. For example: sit next to an unknown on the bus, and you could care less; realise that it's someone off t'telly and suddenly you're interested- they gain 'presence' in your eyes. Walk past a strange teacher in the corridor and you wouldn't know that, were they to walk into a classroom the kids would have hernias with fear...because they were a senior member of staff with a fearsome rep. Presence is simply our reaction to others; when we observe others reacting submissively to them, we describe them as having presence. But they don't really- they have no innate quality.

When people talk about presence, they are really describing a way in which people routinely act towards that person, and unifying the concept by internalising it in another. So there's nothing you can really do to gain it, because it doesn't exist in the way that, for example, large biceps exist, and can be improved by training.

But there are always, of course, things that we can do in order to help generate this reaction in others- after all, there must be reasons why people act respectfully towards some more than others. Some you can directly affect, others less so:

1. Have high status; I mean this in a structural way. The higher up the tree you are, the more deference that people usually devolve to you. I say usually, because this doesn't always follow.

2. Act with dignity. This is only slightly less nebulous, but still concrete enough to be intelligible. Literally, walk tall, speak at a slow, comfortable pace. Speak to people in the room YOU want to speak to. Don't answer shouted questions. Avoid excessive displays of emotion, shrieking, or leaking. Especially leaking.

3. Be organised and ready for the lesson. Be there before them if you can; have all your resources ready. Structure your lessons, either beforehand, or in a way appropriate to the ongoing lesson.

4. Be calm and, as far as possible, act confidently. The children smell your newness, and because they resent change and often bully outsiders, they're reacting in a predictably sullen way to your authority. Act like you're in charge, even if you don't feel like it. This might be at the heart of your 'you need more presence' feedback.

5. Be fair, consistent, and strict with your sanctions and rewards. If someone crosses your electric fence of rules, fry them. But without pleasure.

Number six is the glue that holds these others together. Presence is accorded to you over time by others. It is largely based on an emergent relationship which, like all relationships, grows over time rather than springing into life ex nihilo. It can be accelerated by showing them what kind of person you are; resilient, resolved, professional and dedicated to your role. But it doesn't fall from the sky like snow; it grows.'

When someone tells you you have low 'presence', thank them for their input, and then ask them if they'd like you to pinpoint the structural base of a rainbow on your Tom-Tom, or something similarly philosophically intangible. Then you can go ask someone for practical advice instead.