This is going to Hurt me more than it hurts you... 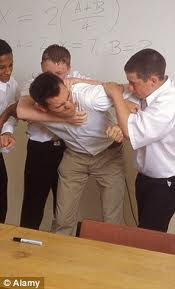 Gladiators ready! Michael Gove continues to surprise with his reasonableness, by declaring that from now on, teachers will be allowed to use reasonable force in classrooms, and encourages schools to abandon well-meaning but self-defeating 'no contact' policies, which were designed to safe guard children (and quite right too) but ended up with teachers standing by as kids got pulverised. Read the BBC report here.

So; another week, another teacher friendly policy. If he's not careful, the Unions won't know who to protest against*, given that he's promised to practically abandon the school Self-Evaluation Form (SEF) and now, streamline the diktats from The Department of Silly Teaching to something digestible.

Hang on, though; this isn't a new initiative. In April 2010 the DCSF (as the Laughter Factory was known then) issued guidelines that advised teachers they had these powers and rights already; to use 'reasonable force' to prevent harm, damage to property, or to maintain good order in lessons and the school at large. This meant that teachers could, say, use an open palm to herd someone out of a room; to hold an attacker in order to prevent a fight; or remove a weapon from someone's hand without their consent. Obviously, the word 'reasonable' still left enough details blurred to allow any number of devils, but at least the guidelines were backed up by the Apprenticeship, Skills, Children and Learning Act (ASCL) 2009, so it had solid legal foundations.

AND, under an initiative spearheaded by that stalwart of Conservatism, er Gordon Brown, Heads already have the power to approve searches of a pupil's bag or locker without their consent (with reasonable grounds) if there is suspicion of the presence of knives, alcohol, pornography, tobacco, electronic devices, and most importantly here, drugs. In fact, they can even search for and seize legal drugs such as methadone or glue. So Gove's expansion of this list to include anything 'prohibited by school rules' will expand that club to include...what? Waterloo Road DVDs? Tuck?

So; has Gove simply reiterated what already exists? Has he simply announced that, from now on, oxygen will be free to all UK citizens, and that anyone who wants to breathe in and out can do so safe from the fear of incurring charges? It looks like it, and teachers will be watching the content of his speech with an understandable mixture of interest, scrutiny, and low hopes. Given the relationship between the profession and their Whitehall Gradgrinds, I can't say I blame them.