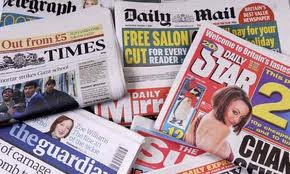 Learned a valuable lesson this week about how real life gets made over into news stories, and it wasn't edifying.

There was a tragic accident at my school on Wednesday. That's as much information as anyone needs to know, because the people that need to know about the minutia already do, and that's the way it should be. As someone once said, 'Just because you're interested in something doesn't mean you have the right to know about it.' Which I think is a pretty fine counterpoint to the argument that everyone's private spheres should be shredded and put on Youtube if there is even the rumour of any public interest in it. A girl fell from a height and seriously injured herself. If you need to know more, Google will assist you. It's a family matter, and to a much smaller extent, a school and community one.

The aftermath is what I want to talk about; particularly a grim news item that appeared in what I will mellifluously refer to as a London Daily Newspaper. It was just a short story, no more than a footnote really, referring to the accident. I'll quote you:

A young girl is fighting for her life after falling six floors down a stairwell at her school.

Terrified pupils are thought to have watched as the girl, 11, fell over the banister of a stairwell at the Raine's Foundation School in Bethnal Green on to her head.

Two years ago an Ofsted report criticised the quality of the school's buildings.

In 2008 Ofsted inspectors said: "The school's curriculum, which is satisfactory overall, is hindered by the restriction placed on it by buildings which are not always fit for purpose."

How journalism works 1: If there are six flights of stairs in my school, I’ll be very interested to see it. Two floors, certainly, which could generously be described as having four flights of stairs between them. Still, six sounds more exciting, doesn’t it? Stick it in.

How journalism works 2: Pupils, terrified or otherwise, didn’t watch as anyone fell over a banister, as all testimony and camera evidence has shown. On the other hand, it’s far more exciting to imagine it if there were. Stick it in.

I suppose we could be generous and say that the reporter did say It was thought, which could mean that the reporter thought it even if it never happened. That’s nice, isn’t it? If I can think it, I can say It Was Thought. A nice linguistic syllogism.

How journalism works 3: The OfSTED report quoted here does indeed make reference to the building as being ‘not always fit for purpose’. No argument there. Which makes it sound as if it was an accident waiting to happen, and we were teaching in a death trap. That’s bad enough; what really pulls my pin out is the implication that the school (by which I mean the staff) allowed this situation to happen and continue. The insinuation is clear, and vile. Because what OfSTED were referring to was the fact that the building, custom-built to Victorian civic specifications, is essentially a different shape, size and structure to what more modern civil architects would design were they to build a new school in 2010. That’s all. Some of the rooms are slightly too large, some of them slightly too small and other more heartbreakingly trivial points. The building (including the banisters) is safe and sturdy. There hasn't been a premises related accident in living memory or historical record.

But of course, five minutes on Google and the discovery that the building had in some small ways come up short, and we no longer have a tragedy, we have a story. In a vacuum of information, speculation and imagination act as oxygen. What we imagined to have happened becomes what happened, because no one can challenge it, as if the truth was so bleak and unclear that it needed to be tarted up to be taken to market. Well, I don't have the circulation of the Newspaper, but the school deserves an advocate, so I'll make it as an individual and not as a representative of the school body.

I can speak with some authority on this: I was teaching a hall of sixth formers, metres away from the accident. I was amongst the staff who were at the scene within seconds, and it is something I hope I never have to repeat. Unlike the reporter, I can confirm the facts, such as they are, and I can confirm how plain, grey and awful they are. They don’t need to be sexed up to inflame interest; if the truth isn’t exciting enough for the prurient tastes of writers or readers then they should pursue fiction and let people endure disaster without the added indignity of conjecture. I was touched and proud of the school's response to this accident, and the response of the students and other staff. I was less proud that anyone should see opportunity in tragedy for anything other than a respectful description. But why wait for the facts, when fantasy sells stories? The fact that it was such a tiny article, such a scant but scathing aside tossed in to such a small report, makes the implication stand out even more. There was, it must be said, no need to do so.

Why does this happen? I won’t repeat the sin of speculating about a particular reporter’s motives. But I’ll exercise my right to theorise in general. Tragic accidents resist explanation or reasoning; they defy our intuitive habit of trying to explain why things happened, because asking why implies that an intention was at work behind the events. That’s why we turn so easily from blunt descriptions of events towards ‘who’s to blame’ and ‘who can we point at?’

Witness the Volcanic eruption that parked all the planes this year: the story hovered around ‘Volcano erupts’ for a few days because nobody could blame anybody, until quickly it descended into ‘Who’s to blame...for people not getting home/ paying for the hotels, etc?’ It’s as if we need to try to find purchase on tragedy and blind fate, because we can’t imagine that sometimes, things are beyond our control, that we aren’t complete masters of our destinies, and that sometimes, just sometimes, accidents happen and the only correct response is to mourn and to endure.

Dedicated to the family.