Why News Reports About Schools Are Often Wrong

Sometimes when I watch news features on schools, I wonder if I am listening in Armenian to someone speak in Lithuanian. Take this report from BBC's Daily Politics. It started off by asking  the old chestnut, 'Have kids got worse?' before looking at some oddly divergent data:

1. Permanent exclusions are at a five year low- 0.08% of the school population, which is jolly low.
2. Reported violent assaults against teachers are at an all time high, with many resulting in hospitalisation.
3. A Teacher Survey indicated that 92% of teachers surveyed said that behaviour had become worse.

Incidentally, claims that students have always been like this are often supported by the tired old mare of Socrates, or sometimes Aristotle, sometimes Plato:

'Children today are tyrants. They contradict their parents, gobble their food, and tyrannize their teachers.'


I've read this dozens and dozens of times. No reference can be found for it, because it's made up. Old Andrew (@oldandrewuk) does a fine job exploring this oddity. Perhaps Bill and Ted heard him say it? It seems that people who want to grow a bit of credibility for their prejudices are happy to invent supporters at times. I find it difficult to believe that someone would just invent a quote, but then I'm not Johann Hari.

So, forget Socrates. Are kids getting worse? WELL FAR BE IT FROM ME TO START A BIG BILLY JOEL FIRE, but the fact that exclusions have gone down at the same time as reported assaults have gone up, would seeeeeeem to indicate that there might be some kind of link between the two. If you fail to exclude the right students, then more and more teachers will get flat noses. Could someone 'investigate' this please? Because it seems fairly intuitively demonstrable to me.

For me, a far more important question is, 'Is behaviour good enough?' and 'What needs to be done?' When I entered teaching I was flattened by the way kids spoke to adults and teachers. Truly astounded- and I'd just come from eight years in Soho nightclubs. We were used to finding and liquidising drug dealers and bad lads. But to find a kid of fourteen dealing skunk in my lesson the first week I taught made my head spin. Is it worse? Seems like it to me. But I don't care so much. The main thing is, it's bad.

This news report was rushed, felt strangely like it had no centre, and jumped from one question to another without answering any way at all. It simultaneously achieved lack of breadth AND depth. It was a hurried, harassed head stuck round the classroom door and then removed before an image could form. No wonder people watch and believe Waterloo Road.

Which brings me to the reasons why so very, very many things I see on TV about schools are so utterly contrary to reality. Everyone likes lists. Magazines, blogs and the Huffington Post LOVES them. So here's a list:


Why TV Journalism about schools often resembles the Twilight Zone 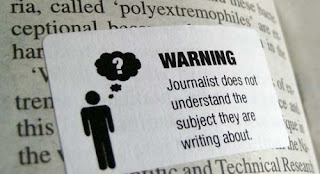 1. They never, ever see a bad school. When does a camera get close to a class melting down? Into a school where the kids are routinely awful? Into a playground where they might get their lenses lifted? Never. Seriously, never. Cameras only get into schools with the permission of the Head, sometimes the Governors. It is a long ship to steer, and there is barely any guerilla footage of schools in crisis. Like the Queen, TV only sees schools at their best behaviour; like Ofsted. You think Vic Goddard would have invited a fixed rig into Passmores if he wasn't proud and confident about his manor? Of course not.

The very rare examples of 'found footage' of bad behaviour have to be smuggled in and out like elephant-foot umbrella stands or bush-meat through Gatwick. You may remember the excellent, eye-popping footage of a day-in-the-life of a supply teacher that the journalist Alex Dolan provided for Channel 4's dispatches. It was gruesome, even though teachers throughout the UK and beyond would recognise it as common. The GTC drummed her out of the profession for bringing it into disrepute, despite the act that it was in disrepute already because of situations like the one she exposed, and ironically the GTC supported that situation by suppressing its public dissemination. They should have given her a medal, not chastened her. What a pity it's been canned *throws a single white rose on its hearse*.

2. Like most people, they reckon they know what teaching a class is like. They don't. Unless you do it, you don't know. Unless you've had a room full of kids laughing at you, ignoring you, or cursing you for no reason other than that you wanted to get them all looking at a board, a book, or you, then you have no idea. Trust me on this. Dispense with your Care-Bear philosophies and Noddy-policies that suggest children will leap to attention if the teacher cares enough, or engages with them, or creates fun, funky lessons. This isn't Dead Poets.

3. Like most people, they believe that teaching is fairly straightforward. It is not. It is certainly not simply being an expert in your subject and devising interesting ways to communicate this expertise. Most of your job, especially at first, will be behaviour management, planning, paperwork and other thrill-suckers.

4. It's far easier to speak to non-teachers than teachers. I do a bit of telly-whoring from time to time; I speak at education festivals and conferences. But I have to do that outside of my real job, which is teaching. I had the possibility of a telly slot the other day, but I had to turn it down because- guess what- I would have been teaching. at the time. So who do we get? Anyone who's available on the Rolodex. If you're lucky, like in the DP report, you'll get some ex-teachers at least. But teacher opinion- the ones who rock up to the ACTUAL CLASSROOM- is rare. Rentagobs abound. They're often the ones with something to sell.


5. The issues of schooling are hard to summarise in a few minutes, and the usual approach of 'one person says this and another says that' journalism projects the illusion of balance at the expense of a clear picture. Some people think that teaching kids has become much harder because of a swing towards rights over responsibilities; that behaviour has become worse for many reasons. Who says so? 92% of teachers in the survey. Now that is a lot of people. Who doesn't say it? Mostly people who work in easier schools, or who only see schools at their best. Or Trevor Averre-Beeson, Peter Hyman's (ex Tony Blair speech writer, now Head of '21st century school' 21) old headmaster. What kind of balance is that?