To see ourselves as others see us. The Ghosts of teachers past. 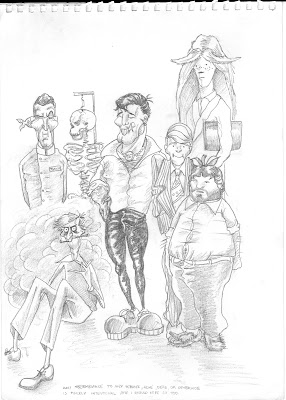 Been spending some time in an Glasgow attic recently. Not, I stress, as some kind of East Scotland Quasimodo, nor in the capacity of a squatter. At my father's behest, I was invited (read: endlessly told since time began, through the Big Bang, past the Singularity and into the transcendent ether of unknowability) to 'sort out some of that junk upstairs'. Junk indeed. Star Wars jigsaws, vintage Q mags, and Viewfinders, Merlins, Commodore 64s, comics in their thousands and posters of Cindy Crawford, all composting nicely for decades, in countless neat boxes like the US Military warehouse in Raiders of the Lost Ark. A childhood spent efficiently, which is to say, wasted, in a broth of fantasy, imagination and introverted theatrical extravagance.And probably, not many girlfriends.

In between the Dungeons and Dragons Player's Manual and the University essays I found an odd pocket of then: sketchbooks from a time when I fancied my pencil skills before I realised I had the natural gift of Stevie Wonder. I found a batch of caricatures and sketched impressions of my own teachers. For the first time I looked at them as the found artefacts of someone other than myself; seeing myself as a student at a school somehow separate from myself. Some empiricists say we mistake similarity for identity; that the person you were yesterday is not the person you are today, literally. The Buddhists believe that there is no 'you', in the same way that you can never put your foot into the same river twice (or, if you're of a Zen humour, even once). 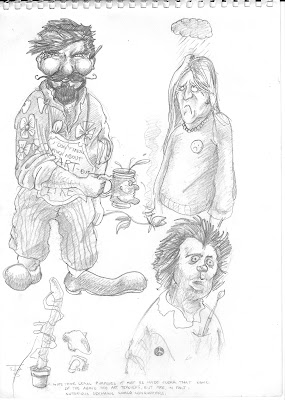 Looking at these pictures I saw myself through another's eyes. What would I have made of such things if I had discovered them drawn of myself? The first thing that struck me was how simultaneously innocent and vicious they were; utterly unkind and indiscreet, but not in any way you would be surprised to see in a Beano (although I imagine by now the fruit of DC Thomson's cartoon loins is full of zombie disembowelment and barely veiled slasher pornography). Physical oddities were popular targets; height, weight, mad eyes, skinny fingers and tatty clothes. Smoking stood out, oddly in a Glaswegian school twenty years ago (where I imagine it was practically compulsory. I can still barely believe that when I was a rookie teacher my first school had a SMOKING STAFF ROOM. Dear God, I feel like Buck Rogers when I say that: 'Ah, Tweekie, this is what we called Disco. Dance with me!' 'Beedee beedee.' etc)

It's all pretty unforgiving. I used to do caricatures of teachers, students, on request, and churned these out in between lessons in the playground. (No, I didn't play much sport. Why do you ask?) Even more odd was that I used to SHOW THESE TO MY TEACHERS. I'm amazed they didn't spanner me. And if any of them are still alive, you're perfectly welcome to do so. Free go. 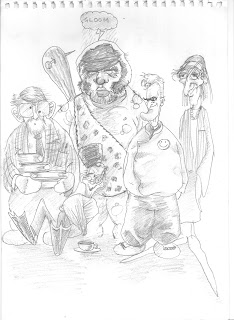 They also show how a teacher's personality or lack thereof will make its mark. There was the creepy one who licked his lips at the sixth formers, the playah, the Earth Mother, the useless one, the one that was too kind, the keen one, the mad ones....the taxonomy of teachers has been done to death in the fashionable blogs years ago, but you follow. Kids may not have lived a life of texture and complexities, but they are quick to categorise. (not unlike fans of Bloom)

What does it teach me? Kids notice EVERYTHING about you. You're doing your monkey dance in front of them for a few hours every week, and you're on full view. You lost a button? Someone saw it. You excavate your lingerie with an 'invisible' pincer action? It's been noticed, filmed, and Youtubed. Flies down? You have a nickname, promise me, and not a kind one (unless you were visited by trouser fairies in the cradle). Didn't shave? Forgot to cut your nails. YOU HAVE BEEN JUDGED AND SENTENCED BY THE CRUELLEST COURT SINCE LA GRANDE TERREUR.

I'm now off to buy some more suits, white shirts and monocles.

That's a joke. I have PLENTY of white shirts.