What is The Children's Commissioner actually FOR? Speakeasy exclusions and good intentions 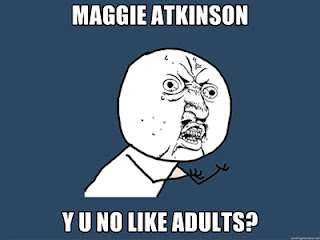 The Office of the Children's Commissioner is yet again proving that it's worth every penny of the millions ploughed into it annually from the public purse, not the least of which is the gargantuan, supersized salary of the Grand Vizier herself, Maggie Atkinson, at around £138K, plus I imagine an enormous amount of lollipops and Sherbet Dips. When the office was created in 2005, it was envisioned that the Commissioner would give the 11 million children in the UK a voice. 22 million parents, I imagine, are perfectly conversant with the timbre and volume of that voice already, but it was a nice thought.

What is the Children's Commissioner actually for? To represent the interests of children? Well far be it for me to get all 'technical' on your ass, but the Commissioner isn't elected by a mandate, obviously, so it's imposed representation. By adults. So it's adults speaking for children. Isn't that what we do anyway?

And how are children represented by the office in today's news? Well, by the looks of it, by making it even harder for schools to maintain a safe and structured learning environment, it seems. This report on the BBC, and everywhere else, sees a new report produced by the Office claiming  that many school illegally exclude children, AND that children shouldn't be excluded for 'trivial' reasons such as uniform or hair styles. Or 'Leave Children's Weird Hair Alone' as the Express thoughtfully and sensitively put it.

I think everyone can agree that exclusions shouldn't be done under the table; they should be public, transparent and fair, and any process that smacks of the backstreet exposes itself to abuse. But what the Office doesn't recognise is that the reason that schools are forced into this position is because exclusions have been made so very, very hard to do. Schools are now picked apart like carcasses on the Serengeti for excluding children; one of their performance indicators, as assessed by Ofsted, is how low their exclusion rates are. A low rate is seen as indicative of good housekeeping.

But depressingly, the most obvious solution to any school wishing to appear angelic, is simply to exclude far less, which is a monumental example of putting the cart before the horse. Exclusions are a necessary and intrinsic property of a well run school. If a pupil defies the conventions and rules designed to keep everyone safe and secure, then they are usually set some kind of interim sanction- detentions, report cards, etc. But what if a pupil fails to respond to these, or any other interventions designed to help them habituate? There has to be a terminal point, reached only after every other option has been spent- and that point is the exclusion, temporary or permanent. It simply has to be.

The alternative is the current car-crash of a system that I walked into when I joined teaching ten years ago, where kids who persistently misbehave are simply...kept in classrooms. And the tragedy of it is that the education of everyone else is decimated. I've seen it, and every teacher in any kind of difficult school can see it. And even sadder, every kid I know who doesn't tell their teacher to stick their lessons up their arses can see it, and they despair. They simply look at us, the adults, and wonder why we don't seem to be able to do anything with persistent offenders. The answer is that many schools choose not to. They simply contain them in the classroom and cross their fingers.

Then for god sake, let us, the teachers, do our jobs and make it possible to do so.

There exists a small, persistent minority of children who have the ability to completely devastate a lesson, and all lessons because they choose to do so. This isn't a statement of distaste or dislike for them. This is simply truth. Just as in any society there are some law breakers who place themselves beyond the values of the community, so too are there children- who grow up to be adults, incidentally- who display exactly the same characteristics. Yet we are often unable to remove them to a place where a) they can no longer harm the education of others and b) they can be educated in a one-to-one setting.

The current system is a complete clusterf*ck. They remain, and learn that there are few consequences to their actions. And they grow bold, wondering where the next boundary lies. And other children, whose lessons are routinely depth charged by these kids, look on, and wonder if they too can get away with misbehaviour; and so the behaviour normalises downwards, and everyone suffers.

And at the end of this grisly process is the teacher, going out of their minds trying to teach, and being interrogated by parents, 'Why can't you control the class?' as if control were some kind of Jedi Mind Trick. Which is why so many new teachers leave within five years of joining. It's as if we have vowed to protect the interests of the most disruptive and forgotten the rights of everyone else, as if they ceased to matter. I wonder when, one day, a parent will launch a legal challenge against a school for failing to provide a safe educational environment for their child. Soon, I hope.

The social and emotional damage this situation causes teachers and children is awful, and I am precise when I say that it is a scandal. It's why I got into behaviour writing in the first place, because schools and teachers weren't allowed to do the completely obvious, natural thing; show children that good behaviour is rewarded and bad behaviour is discouraged.

It's not that I want to see badly behaved kids punished for pleasure, or revenge; but actually because these children are so poorly served by the current provision- packed off to an 'internal exclusion' centre, which are sometimes brilliant, and often terrible, or merely holding pens. Given proper support in secure, disciplined environments by trained professional teachers, they could actually learn to become more socialised and educated. Instead they are frequently fobbed off with half measures.

And let's not pretend that children are routinely excluded for minor matters: these days you need to practically pick off milkmen with a sniper rifle to be considered for an exclusion. A permanent exclusion would require that the child had constructed an airborne Ebola virus and pump it through the school air con. And admit it. It is really, really hard to get excluded.

I saw two charmers on Channel 4 News tonight who were 'at risk' of exclusion, as if they had no responsibility in the matter. They admitted they had been 'rude' to the teachers. Only a teacher knows just how rude a kid has to be before they get put on Exclusion Death Row; it normally means weeks, months, years of abuse and arrogance, of making their teachers and other people lives misery. These aren't misguided angels with dirty faces. These children have to be persistently unpleasant to get there. So don't tell me that schools over exclude. They massively under exclude. And the reason they do so off the books is because doing it on the books will lead to them being labelled Unsatisfactory. It is as simple as that. The process has been driven underground because the government insists on Prohibition. No wonder Speakeasys start to open.

So, thanks, Office of the Children's Commissioner. I know that you have to justify your outrageous, credit-crunch-defying salaries somehow. And when it comes to taking the moral high ground, nothing is easier than saying, 'Will no one think of the children?' while wringing your hands like some Victorian Thespian.

Sometimes being an adult means saying 'No' to children, for their own good. I know it's easy to say 'Yes' all the time and be the nice Mummy. But all good parents- all good educators- know that sometimes, children need to know the boundaries. Tough love is still love, and love without boundaries isn't love at all; it's indulgence.

If a school excludes for make-up or uniform, it isn't excluding for those things directly; they exclude for the child's persistent refusal to follow school rules, created for everyone to be fair. If a child only follows rules they agree with, then schools cannot operate. Their acceptance of these rules is implicit in the application letter they sent prior to their arrival. In societies we don't get to personalise the rules; we abide, and support out community's will. We learn to rub along with others, and we learn that sometimes the individual's needs must be set against the greater community.

So, I return to my original question: what is the Office of the Children's Commission actually for? Because it seems to exist to undermine the institutions that want desperately to help children the most: teachers, parents and schools. Let us do our jobs. You can go...I don't know. What IS it you do again? Because £138 grand would buy me a lot of textbooks and pens.