Use the Force, Harry: beware quotes with no sources 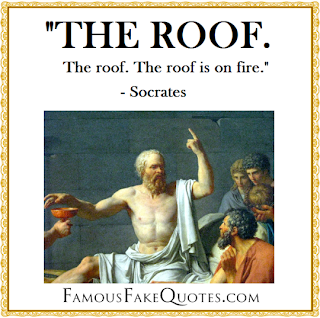 KENT: No, sir; but you have that in your countenance which I would fain call master.
KING LEAR: What's that?
KENT: Authority.

Who can you trust? I think this every time I come across a quotation on the internet. Education is my thing, so I'm not occupied by the ones that fill cat calenders and planners with rainbows. Today I read about an incredible conversation that took place between Charles Dickens and Fyodor Dostoevsky, as reported by Claire Tomalin in her biography of Dickens, except that it was entirely untrue. History, that ruined rubble of bone and boulder, is vulnerable to the pen of invention, and the dead cannot plead for themselves any more. Just as monasteries used to manufacture relics to borrow the authority of God (including, I might add, the foreskin of Christ in some cases, not once, but often, and in many places) so too do many people repeat the thoughts of great men and women in an attempt to support their claims. Unfortunately, many of them are as authentic as the Nazarene frenellum.

You'll have seen this one:

'Those who know how to think need no teachers.' 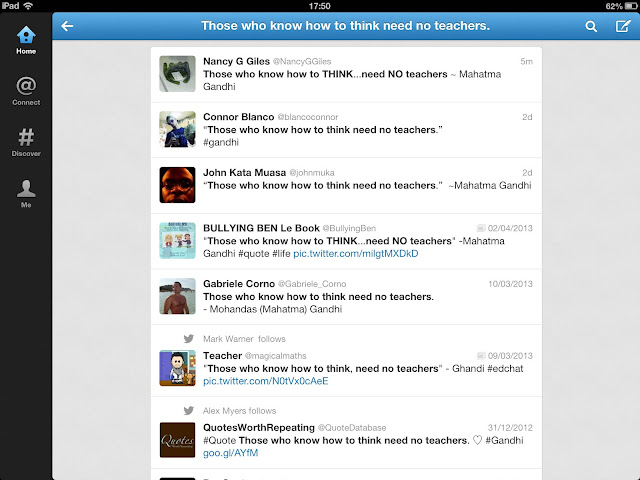 You see this one a lot. Like many neat aphorisms, it has the virtue of pith, the whiff of innovation, a pinch of ancient wisdom and of course the USP of originating from Mrs Gandhi's high-achieving son. It's elegant, symmetrical and attractive, so rhetorically it benefits from an aesthetic magnetism as much as any logical appeal to verity. And, of course, it's Bapu, one of the few moral Übermenschen who successfully escaped the gravity of messy reality to become an international avatar of wisdom and compassion. If he said it, it must be true. That way we can relinquish the necessity to examine the argument.

That's not by itself a complaint. We put our trust in authority figures all the time; we have to. If a fireman tells 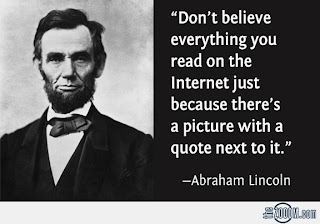 me that I should turn back because of a nearby fire, I rarely question it. When a mathematician tells me I've given him the wrong change, I'll auto-defer. It's an efficient way to conduct everyday life.

So back to the artist formerly known as Mohandes Karamchad Gandhi. He seems to be saying that teachers are, at least sometimes, unnecessary. It seems to suggest that thinking skills are more important than merely being taught content. This is a familiar tango in education, and Gandhi seems to be throwing his loin cloth in with the skills corner, and suddenly it isn't looking good for the Facts brigade. Who have they got? David Starkey? BOOM Starkey's on the mat and begging for the bell.

But did he actually say it?

A quick search of Mother Internet will give you a lot of this:

Which is to say lots of quotation websites. Or websites quoting it. I ploughed through about ten pages of this before my brain started to melt. Nobody, nobody gave a source.

So I tried a Google Book search. Maybe it could be found in the dry pulpy scrolls of the ancients: 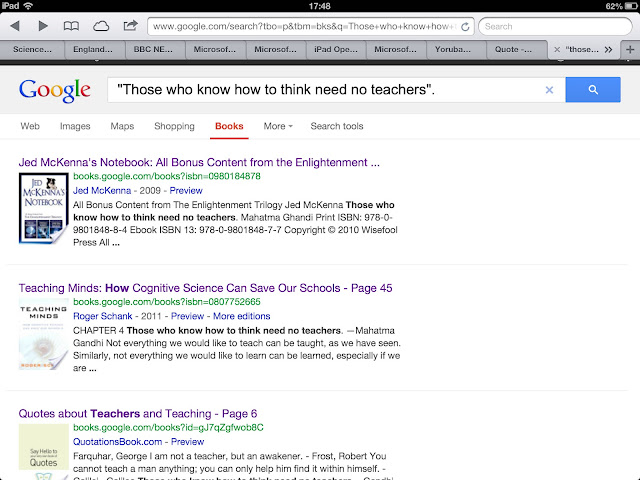 This, for page after page. No references, no sources, just the quote again and again, and always used by people who unsurprisingly had an axe to grind about thinking skills. Now this doesn't mean that Gandhi didn't say it. Perhaps this says more about my own research capabilities, and if anyone can provide me with a credible reference I am perfectly happy to reverse my suspicion that Gandhi did not in fact say this. But in a way it doesn't matter if he did or didn't. 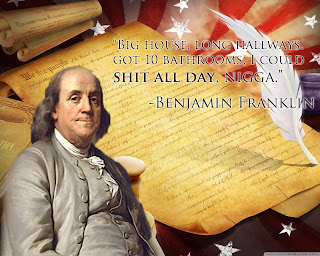 Why? Because it proves a point: establishing the provenance of this quote isn't easy, and if I couldn't do so in an hour of searching and asking, then I suspect- and this is purely speculation- that most people quoting it couldn't either. What we have is another splendid example of cognitive bias: we perceive and promote that with which we agree or are attracted to with far less scrutiny than that with which we disagree.

Even I'm doing it right now, picking on a crypto-quote that- and I'll be honest- I think supports a weak position. I think that 'knowing how to think' isn't an entity separate from the quality of the content that informs it. I think that thinking can't be taught; I think that thinking is the name we give to a process, rather than a talent. But in my defence I'm making that explicit, and I'm not using Gandhi to back me up.

What this shows is that when it comes to knowledge claims, belief and passion play as much a part in most of our reasoning as any appeal to logic and rationality. When someone throws a quote out in the middle of a discussion in what appears to be an attempt to justify a point or advance an argument, I'm often tempted to say, 'So you like Winston Churchill/ MLK/ Che? Groovy. I like Tom Jones,' for all the use it provides.

There are others you'll probably know, which have already been elegantly punctured by others, so I'll outline them only for the sake of summary:

'Education is not the filling of a pail, but the lighting of a fire.'


You don't have to move far on the internet before you trip over this one. It's attributed most commonly to Yeats, and sometimes Socrates. It might as well be attributed to Gile Brandreth, because neither of them said it. 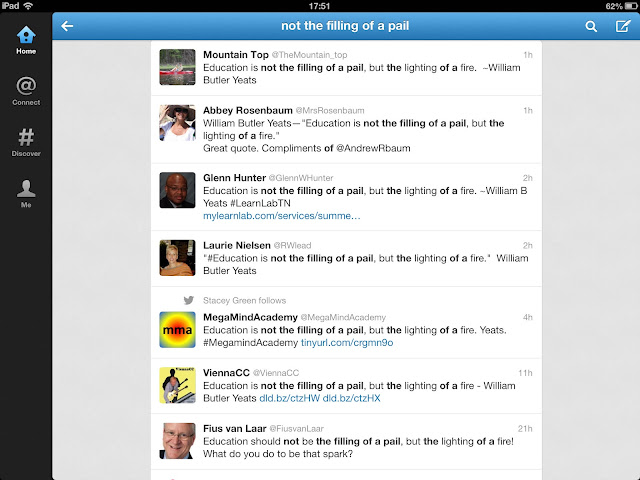 People LOVE this quote. It's like catnip, or Umpty Candy. It's manna for anyone who eschews content and believes in child-centred education (itself a weasel term- is education ever not about the child?). It is endlessley requoted and cross-quoted, and carved in marble anywhere anyone believes in the laughter and magic of children. 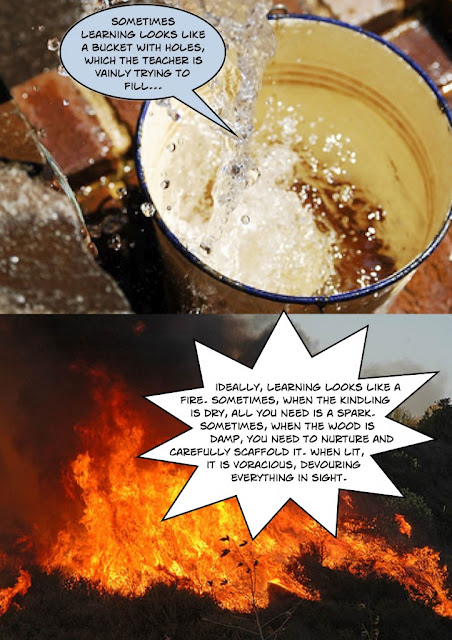 See? Don't waterboard your students with useless facts. Set light to the bastards.

It might be true, it might not- I feel not- but one thing's for sure. It didn't come from Yeats. Plutarch said something like it, and that raises another point: mostly people requote it with no understanding of the context, or often, indeed, who Plutarch was. It borrows authority like a crown and sceptre. It becomes dogma, rather than a catalyst for understanding. It fills a pail, instead of lighting a fire, if you'll excuse me.

For a full explanation, I beg you to look at the excellent site The Quote Investigator, where you'll find elegant post mortems of this quote and many more.

One last one, for dessert:


'Everybody is a Genius. But If You Judge a Fish by Its Ability to Climb a Tree, It Will Live Its Whole Life Believing that It is Stupid.'

It would appear that the World's Smartest Man™  is an enemy of linear assessments, or monocular interpretations of intelligence. In fact, a quick search for 'Multiple Intelligence Theory' and this quote throws up a plethora of sites eager to link both:

And you can buy this quote in a variety of classroom-friendly formats: 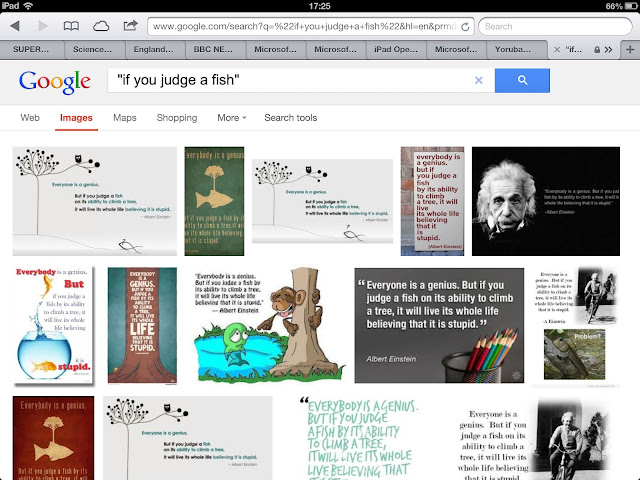 There are, it would appear, and enormous number of people dedicated to protecting fish from being made to endure cruel forms of assessment, and I think we can all get behind that. But Einstein wasn't one of them. The Quote Investigator tracks it down here: the closest is from a man called Matthew Kelly (Not the beardy presenter) and decidedly not the Father of Relativity and Athena Prints. Unless of course the Quote Investigator is itself an enormous meta-hoax, and the machines won the great war of the 21st century and this is all a Matrix.

Does it matter who says something? Yes, if you believe in telling the truth. Does a single sentence, vivisected from its context mean anything more than its explicit meaning? No. Nor does it support an argument. Quotes should probably only be used to provide a shorthand way of expressing something already being discussed, or as a signpost to an argument already understood between two debaters. This week, when the 'distinguished' Dr Jean Denis Rouillon announced that women shouldn't wear bras, and he had the science to prove it, a million women went 'That's great. How many breasts do you have again? Oh.'

If you like Fake Quotes, or you just want to get ahead of the curve, check out this page:

And the next time you see Abraham Lincoln, or Siddartha Gottama, or Jesus, or John Lennon being used to support iPads in a classroom, or chalk-and-talk, or any damn thing, think of this: 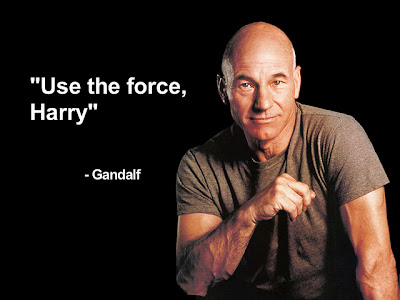