What makes a good teacher? Clue: the answer isn't in a questionnaire

What makes a teacher? Such a small question, with so many arteries swooping away in fractal branches of infinite regress. Changes in the application process have predictably irked and irritated some. My favourite metaphor, well-worn but serviceable as a pair of lucky pants, is that of a Rubik's Cube; whenever something, anything, changes, something else changes to accommodate it, as if one were moving a white square from the centre to the corner of the fabled Hungarian toy for obsessed children of all ages.

As in popular solitary pursuits of manic friendlessness, so in policy. Given a closed system, every event has an equal and opposite response. Newton, you can HAVE that for nothing. If I spend an hour learning Sanskrit, my research into cold fusion suffers. I've learned to deal with it.

Some have not. Whenever anything changes, some people seem to be blind to this simple principle. Witness the Napoleonic shindigs that erupt whenever somebody moves a pixel on a social networking site. It's terrifying: pages are launched (ON THE WEBSITE ITSELF I MIGHT ADD. DEAR GOD IS IRONY DEAD?) decrying the desecration of the temple. Oh, the howls, the humanity. I tell you, I would LOVE to see some data on people who leave as promised in response to the unforgivable cheese-moving of Zuckerberg et al, compared to those who...well, seem to be jess fine three weeks later, their sensibilities soothed by time and being a bit stupid.

So: teacher training is being shaken up. THREE. CHEERS. Here we have one of the most important professions in the world, but in the UK we have an application process that appears to be as rigorous and diligent as a Sorting Hat. ('Ah, you have patience, and a pure heart: an ENGLISH TEACHER you'll be. Now you....you have cunning and slavishness at your core......CITIZENSHIP MY LAD.' etc). I had an odd route into teaching; I had a two-lane process- the normal PGCE hoop-jumping, and the 'Fast Track' (motto: 'Be the inspiration from the Staffroom to the Bathroom'), which was a sort of hellish, prodigal precursor to Teach First (motto: 'I will work myself to death for a year')  .

The PGCE was thorough, if nothing else. If the online question form had asked me to record the volume and intensity of my gastric dilations, I wouldn't have been a bit surprised. Then an enormous wait; then a placement in Primaries and induction observation weeks. Then the interview with the teacher training provider. Here's an odd thing; at the interview I thought I did fine, and then I was hit with the requirement, a week later, that I should spend ANOTHER week in a secondary school before they would accept me. So I went back to my same school (Ellen Wilkinson, *tips hat*) and spent another week with the fine George Wrigley doing exactly what I'd done the first time already, losing a week's pay in the process. Cheers for that.

Which is fair enough- maybe they spotted some naivety on my part, some wandering inexperience. The thing is, I had no idea what the second week was for, but that it had to be done; and once done, I was accepted onto the course. 'One more week,' they thought, 'That'll sort the fucker out.'

On the Fast Track application, it made joining  the special forces seem like applying to become a Jubilee river-pageant steward. ANOTHER online form, with red tape straight out of Winston Smith's holiday Visa application to Eastasia.

Here's where it gets serious. THEN a psychometric testing session that took a whole afternoon. And THEN, and then... a two-day residential psychological assessment where we had one-to-one monitoring by aptitude psychologists, who gave their evaluations to the Grand Fromages. ('Shows promise; may eventually write a petulant and cretinous blog about trivia. Keep away from children.'). Can you imagine the expense of this enterprise? I might add that I swooped through this like the Red Arrows. Clearly I was the Alpha DNA of teaching, to be copied and reproduced in Petri-dishes everywhere. A bit like Judge Dredd.

And when I walked into classrooms, I got shredded like Jeremy Hunt's emails. Truly dissected, suggesting the surgical abilities of the Whitechapel Ripper. Looks like all that psychometric voodoo wasn't so prescient after all. Regular readers will know all about my hilarious adventures in misery, my first few years in the blackboard bungle-jungle.

Why? Because in all that lovely assessment, and subsequent teacher training, I had maybe a couple hours of formal lectures on behaviour management, and the unluck to be placed in one school with immaculate behaviour, and another placement where the behaviour was apocalyptic and the coaching was ...light, shall we say? There was more emphasis on working with EAL pupils in my teacher education than there was in running a classroom. Isn't that appalling? Isn't that the most witless, gutless, moronic way you could imagine to disempower a teacher? You wouldn't send a soldier into the theatre of war with a diploma in trowel-appreciation skills, yet we send teachers into the battleground/ rainbow-wonderland dream-factory of the classroom with barely a fig leaf of expertise. 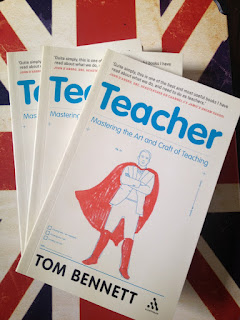 I get angry about this, and we should ALL get angry about it, because it's symptomatic of the necrosis in education; an emphasis on what people would like teaching to be about rather than what it is about; an infantile belief that all classrooms are staffed by legions of biddable, keen, creative children who only need the flint-spark of inspiration to catalyse their evolution into the Omega state of flourishing. Allow me to testify- this is not so. Many children are, by the time they reach school, perfectly civil and altruistic, almost exclusively because of good parenting. But many are not; many treat the teacher as a punch bag until they are taught to do otherwise. For many children, a significant portion of their socialisation occurs WHILE they are at school, not prior to the experience. And we are the ones who are expected to do this, simultaneous with teaching them to read, write, calculate, hurdle and revise.

Allow me a plug: I write about this in my latest book Teacher, Mastering the Art and Craft of Teaching (allow me? Hell, this is my manor; I'll plug as I please and damn your eyes, sir). Click the loyal link to purchase. If you feel a stirring of your loins as you do so, this is perfectly normal.

What do new recruits need?

Literacy and numeracy. I know of teachers who were allowed to resit and resit and resit the QTS online tests until they simply passed. Is that a reasonable allowance? I would say no, and I apologise to any this concerns. But if we the teachers can't provide a reasonable level of these key skills, how can we expect our charges to flourish?

Expertise in their subject area. I can't believe I even have to justify this, but apparently Satan is in charge of the material world, so I do. It isn't enough to be a paragraph ahead of the kids. You have to have a degree of some kind in your subject OR some kind of comparable expertise evidenced in some other way. I'd far rather have a drama teacher who was/ had been successful in their field than someone with a degree in Method. A requirement to degree level understanding ensures that a teacher can teach to A-level, and to challenge the most able as well as the mainstream. I have no problem with the current restrictions on third class degrees, and reduced funding for sub 2:1 bursary applications, because what on earth is a degree but some kind of indicator of expertise? This is not too much to ask. I don't want any of my as-yet non-existent descendants taught by someone who isn't highly qualified in their subject area, and I suspect most parents wouldn't be either. So why defend the 'right' to  do so? It just seems odd.

It says here that applications for Teacher Training are down by 15% since this time last year. Is that a bad thing? I know that teachers already find it hard to get work because of geographical and demographical imbalances between supply and demand. There probably needs to be less, and if the ones that are applying have shown the dedication to get higher degrees, then only someone unconcerned with child welfare would decry it.

Psychometric testing, though? Hmm. You've just read my experience of this arcane and inscrutable process. It says here that from September, many teachers will undergo personality evaluation. Now on the surface this is a good thing; there are simply too many teachers who aren't cut out for the job, and I can say this safely because it's true of ANY profession. We all know teachers who appear to have selected their career by shooting an arrow into a job-centre Rolodex.

OK, Computer- RAGE against the Machine

But the answer isn't psychometric testing. Why? Because such methods give the illusion of sifting and selecting, of discernment and rigour, while simply being a way to legally insure the training provider against future challenge. 'Look,' they'll say, 'The Bones have Spoken. The entrails never lie.' Who says psychometric tests can predict the suitability of a teacher? Any such test is going to be limited to the success criteria imagined by the psychologist designing it. Can any human being so carefully and completely map the well of human experience to say which man or woman will succeed in this life or that? To design an algorithm that anticipates the compatibility of body A to circumstance B? You, gentlemen, are trying to catch lightning in a bottle.

But anticipating the suitability of character is important. So how do we measure it? Simple. By NOT measuring the unmeasurable. By assessing like with like. By having successful teachers monitor and evaluate emergent teachers as they progress through the application and training process, and giving their evaluative opinions as the process proceeds. No test score can do that; only humans, judging humans. We are attempting to assess notions of value and meaning, and we need engines that understand such things, not fatalistic mathematical models of brutality and quantitative banality.

Here are the key teacher virtues: wisdom, gestated through experience; courage, to allow all action to be attempted; knowledge, as the basis for imparting understanding, and justice, to underpin all social conduct in one's sphere. Build upon these, and I find that teachers turn out fine. Build upon anything else as a foundation, and the edifice tilts and leans, sometimes throughout a whole career.

So I wouldn't bother with psychometric tests. It suggests to me just another way for the teacher to be further codified and circumscribed by people who couldn't do the job themselves. Let teachers judge teachers, and let parents and the Polis judge the result of those labours. I wouldn't dream of telling a parent how to raise a child, nor a politician how to justify charging a second home to the public purse; I'm simply not qualified to do so. But I AM qualified to talk about teaching.

Because I am one. But no one asks us.