Dogmatic debate in education only means everyone loses 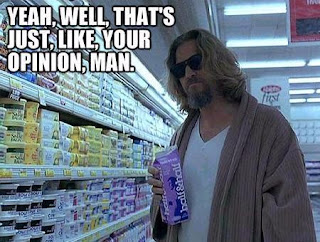 I sometimes despair of the way we debate. One of my bugbears is the tendency we have to polarise discussions into simple for/ against propositions. Watch any parley, however nuanced, between two people and see how long it gets before their position, however tentative initially, becomes entrenched; before a view that they might have only held as lightly as a a JCB holding an egg, becomes as fixed and firm as the Pillars of Hercules.

This is humanity; we define ourselves by the things we value; those things we value, we become. An attack on something we value becomes an act of simultaneous intimacy and violence. It is this transaction, this sublimation of opinion with identity, that ruins the measure of many discussions.

I think we also polarise debate into simple dichotomies because it is easier to do so, because our frail minds, engines of self-justified righteousness, need clear, clean lines along which to navigate. A cartoon or caricature of someone's views, that flat, two-dimensional mockery of the mind that inspires it, is far easier to sketch, and then scorn, than the infinitely varied and personal honeycomb of the human condition. My enemies, we stoop to presume, are beasts and morons. My allies are paragons and prefects of Platonic idealism.

But this reduction, this transubstantiation of gold into lead (however base the gold might be to begin with), is the death of reason. Few people really effectively caricature the embodiment of idiocy or villainy that we imagine. This error takes many shapes in debate:

1. To presume that if my opponent holds opinion X then he must hold opinion Y

This is the curse of ideology. In Britain it is exemplified by the sometimes childish exchanges between the left and the right. 'If you believe in a welfare state,' runs the logic, 'Then you must be for learned helplessness in the poor.' Or to mirror this, 'If you value the liberty of the individual, then you must desire that companies pay no tax.' These are common mis-positions. A cursory glance at the variety of denominational philosophy that can be held within the churches of socialism, conservatism, liberalism or any other ism you fancy will quickly show that no ideology exists in a finished form; that while there are many orthodoxies, there are also many beliefs that can be both halal and haram under the same umbrella.

When a man calls himself a Tory, or a New Labourite, or banker, or a boxer, I resist the temptation to think him a scourge of immigrants, a warmonger, a parasite or a belligerent brute, because the boxes into which we force people aren't fit for their dignity, until they've proven it. We wouldn't countenance, in polite tea rooms, the vicious dogma of the anti-semite or the white supremacist, that demands that all members of subset A have characteristic B, so why do we move so easily from uncertainty to prophetic omniscience about a man's opinions?

2. To argue that because I dislike the general views of opponent X, all his views, specifically, must also be disliked.

The temptation to universalise from a specific is perhaps natural to the human mind. A dog bites me, and I recoil from all future jaws. So far, so Darwinian, so utilitarian. But this shorthand way to find one's conceptual position- by defining oneself in opposition or attraction to a view because someone I already embrace or revile holds it, is slavish, and lazy. This is why we should never meet our idols; they inevitably fall short of the plinth upon which they are placed. I admire Sinatra's tone, but cannot conjoin with his approach to domestic violence; I find solace in the philosophy of David Hume, while rejecting his rejection of identity; I laugh along with the Krankies, but would rarely accept an invitation to a midnight fondue from them.
This is a blog about Gove's reforms, that emerged like the Chest Burster from Scott's Alien films (only the Daily Mail will serve as Harry Dean Stanton, here), and yet it is not a blog about that. I'll deal with the implications of Gove's nuclear detonation for GCSEs, the National Curriculum, the exam boards etc, another time.

I write this in response to the routine, ossified response, the catalysed, calcified effect that interminably follows cause, that passes for political debate at times. Here, I'm talking about the education sector, but I tip my hat to all fields of enquiry in general. I am not a Tory; nor do I support Labour. The only reason I say this is because of the syndromes I have already described. Frankly, you can keep the lot of them; my opinion of many of those engaged in politics ranges from the patronising to the emetic. You don't need to hear a parable from me on the inequities, frailties and inadequacies of the often half-formed troglodytes, parasites and unemployables that pass for our representatives, across the political spectrum; the detritus of society; the narcissists, the self-entitled, the craven, the career polticos fit to do nothing else in the world other than rule.

But for once- for ONCE- I wish that a policy could be announced without the submissive tarts of the press and edu-sphere thrusting their fleshy flanks skyward, or the angry army of denialists and militant naysayers springing into their Jungian Archetypes like Batman sliding down a pole, ready for combat.

Let's ask, 'Am I right?' Let's think about it, free from the many-tinted spectacles of dogma.