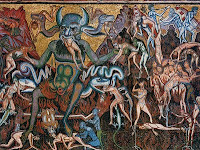 A report by the University of Bristol today claims that it has unearthed evidence that the decision in 2001 by the Welsh Assembly to do away with league tables in schools has directly led to thousands of Welsh children being condemned to 999 years in the Purgatory of Ravnak, the Soul-Flayer.

League tables, which still exist in England, were abolished in Wales after claims that it led to schools circumventing real education, and instead focussing on meaningless scams to leapfrog the league rankings; for example by introducing BTECs or other qualifications that were GCSE-equivalent but lacked academic rigour or credibility. It was also claimed at the time that, even if schools were reluctant to engage in these practises- described as 'whorish and anti-education' even by the heartless Tin Man from the Wizard of Oz, yesterday- then they were forced to participate in order not to suffer by comparison with other, less scrupulous institutions who had spotted the first, and fallen on it like starving rats.

But this new research claims to give the lie to that, and says that once the decision was taken to dispense with tables, a portal was opened in the space/time continuum that enabled the Damned Legion Hordes of Azazel to cross over into our world and steal the souls of every second pupil in year 9, and 2 out of every three in Key Stage 4, due to their particular susceptibility to rap music and badly-spelled swearing.

'It's clear,' said Grand Vizier Phillips, leader of the research. 'There is a clear correlation between losing the tables, and feeding the furnaces of Satan. It really is a huge pity.' When asked to respond to allegations that the report had missed the obvious differences between correlation and causation, and that the link between tables and purgatory had not been definitively demonstrated, the Grand-Vizier's response was unequivocal: 'A hex upon thee! Vade Retro, Satanus! The power of Christ compels thee! I hope that clears things up.'

Teachers in Wales were jubilant at the news. 'Brilliant,' said one, 'For years we'd been labouring under the misapprehension that education meant more than simply getting a better result than the previous year- you know, a bit like the market model, which is premised on infinite expansion, even though we're fairly sure that the universe might not actually be infinite. At last we can get back to doing what we do best: finding out which exam board offers the easiest syllabus and focussing on the children who are borderline C/D candidates. Fantastic. F**k the rest of them,' he said.

Moloch the Devil, chained at the bottom of the Lake of Tears is 27,337 years old.
Email Post
Labels: humour league tables research satire