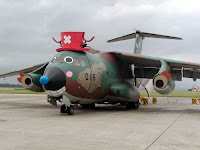 The Department of Silly Teaching temporarily grounded all of its policies today after it was discovered that Education had 'lost an engine' during a routine flyover.

Education had experienced problems over the last three decades of service, but the DfE insisted that after its last routine overhaul in 1988 inspectors had determined it still had 'many, many years of good service left in it.' Thousands of unimpressed teachers who had tried to warn the DfE that Education was, frankly, looking a bit rusty and tired, and would need more than a BSF repaint and a customer satisfaction questionnaire to return it to functionality, were shaking their heads in a slightly smug manner. 'It was an accident waiting to happen,' said one. 'Is there any tea left in that pot? I'm gasping.' But reaction was mixed. 'The Gods are angry with us,' said one newly qualified teacher. 'The High Priests of Induction warned us this would happen if we failed to follow the weekly guidelines. All Hail student voice!' She then stopped the interview and fell to the ground, whispering, 'I believe in Inclusion, I believe in inclusion,' to herself.

Large pieces of Education rained down on terrified inhabitants of leafy suburban new builds; before an hour had passed crews of anxious middle-class parents had cordoned off the impact zone and were excavating the debris. When questioned what they were doing, they were reticent: 'Bugger off,' said a man identified only as Jameson, 'We're going to use this stuff to build a Free School. Possibly in a Barber's shop. Or maybe in a Vikram Hot Yoga studio.'

DfE airlines are looking into the accident, but claimed that, despite the setback, 'Education is flying even faster, to more destinations than ever before. In fact, we've discovered that Education actually flies better the more engines it loses. We call it 'downengining'. ' The Department has already written a document, 'Why dropping an engine midflight adds value to the C/D borderline candidate.' As one spokesperson put it, 'It's only an advisory best practise document. Which means it's compulsory. And if you don't do it, well, let's just say you'll find it hard to run a school with no heat, light or paper, if you get my drift.'