Student Voice: excuse me- do you mind if I teach you? 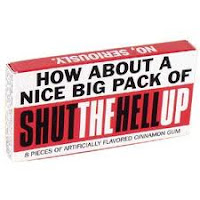 Have you heard the latest? Axe-murderers are being asked to contribute to the length and severity of the sentences that the court hands out to them. Why not? They’re affected by the decision; the outcome of the process clearly matters a great deal to them personally, and in that light, we may as well consider them to be stakeholders. So why shouldn’t they be asked their opinions?

We haven’t got there- yet. As far as I am aware, axe murderers have their sentences handed out to them with gay abandon as usual by our octogenarian philosopher-king judiciary, with no reference to the wishes of the convicted. I strongly suspect that nobody is marching on Whitehall to rectify this unjust disempowerment of the axe-murderer community.

Less happily, this exact level of knuckle-headedness has crept into schools like rising damp. It’s called Student Voice. Perhaps you’ve met? If you have, you may, like me, be rubbing your eyes and clicking your red shoes together like Dorothy having a panic attack, and hoping that it’s all a bad dream. Student Voice wears many faces in education, but usually manifests itself in small children popping up in arenas that previously seemed the preserve of the over-five-foot-club.

Some schools even have them on interview panels for applicants. Stop and think about that for a minute: children evaluating adults for their suitability to a professional post. If I ever- ever- turned up for an interview and some oleaginous year 9 was perched on top of a pillow next to the headmaster, I’d put my hat back on and walk straight out, saying, “Sorry, there must have been some kind of mistake," possibly setting the fire alarm off as I left. Sorry, but we have degrees, don’t we? Perhaps a postgraduate qualification? Possibly even a few years working in the profession? Certainly, every applicant has to be an adult, which must count for something....except that it doesn’t. The assumption that a child has a rational, unbiased opinion that could possibly be of credible interrogative ability must rank amongst the most offensively moronic decisions that have ever been made.

Some schools even have students observing teachers. You heard me: classroom observations. Of teachers. Where, pray, does the child get the experience, impartiality and wisdom to possibly critique a teacher on their performance? You would think that anyone could teach; that everyone can have a punt at criticising it because, well, we’ve all been in a classroom before. Right?

Wrong. I’ve been in a dentist’s chair many times, due to my dentally challenged West of Scotland upbringing, where I brushed my teeth with Nutella. But that doesn’t give me a bat’s wing of seniority or credibility or evaluative ability; I would have absolutely no idea what I was looking at. It might seem like it; but that’s not the same as knowing if they’re doing anything wrong, or more importantly, what they’re doing right. I might, at a push be able to say, “Gosh, that looks a bit nippy, poor chap,” but would that mean I could say the operation should stop. “It was hurting,” I would say. “That dentist was terrible.”

That’s the problem; because everyone has been in a classroom, everyone thinks they have a considered opinion. They don’t. Teaching is a hard, complex job- perhaps easy to do badly, but hard to do well. Learning the necessary content takes years, as does becoming conscious of the skills associated with manipulating that content. And teaching is much more than just delivery of a subject: it’s a project of enabling the flourishing of maturity and practical wisdom that we associate with adulthood. We’re role models, in loco parentis guides and while I’m on about it, lion tamers too, herding our impetuous young charges along paths that they themselves do not yet perceive. That’s the job, and it’s why I love it. But easy it isn’t. The assumption that anyone can stick their oar into the secret garden of education is the latest strategy to suck the blood of professionalism from our sector like vampires. The assumption that students should have the power to tell us how to teach, what to teach, whom to hire, what to have on the curriculum, what a school should be built like, is frightening- and repulsive.

What lies at the core of this problem is that a key axiom is being ignored: adult teachers know more than student children. I’m preaching this for as long as my lungs will hold out. If anyone wants to step up to me on this one then just let me take my glasses off and I’ll see you outside the gates at four. Children start off in a non-rational state: I call it ‘being an embryo’. Rational thought isn’t possible. Then they move onto irrationality in infancy, where they are beginning to learn how the world works. The hope is that, as they grow up, this irrationality is replaced with incrementally improved levels of reason and reflection. Who helps them get there? We do. Adults. We’re the example we made earlier.

But children are intrinsically poor judges of their own development. If I asked a bunch of year threes what they wanted to do today, would they say Maths, or Harry Potter? Unless your children are precocious to the point of nausea, I suggest that the latter box would be ticked every time. Broccoli or Big Macs? Ditto. Children are instinctive egoists, making short term decisions based on immediate gratification and perceived discomfort. Reason is a long way away from their internal discourse, in varying levels according to the child. And that’s because our job is to coax the development of reason, creativity and any other aspect of their intellectual flourishing we can achieve. What it doesn’t mean is that we trust their cognitive capacity about things that they cannot grasp.

When I tell new classes what the rules are, do you think I discuss it with them? That’s a rhetorical question, incidentally. I’m an adult, and a teacher. I know what the rules need to be in order for them to learn, and in order for that to happen, they need a safe, secure learning space where order reigns. The day I let the kids write the rules is the day I ask Ray Charles if my socks match. I don’t waste a minute waiting for them to ponder, rub their beardless little chins and say, “Yes, we agree. Carry on, Mr Bennett.” To Hell with that.

This isn’t child hating, any more than student voice is pro-child. In fact, allowing student voice to infect and rot school management decisions that should by rights be left to the grown-ups actually does more harm to children than anything else, because it allows their education to be put in the hands of the people worst placed to evaluate and reflect upon it: the children themselves. They’re not consumers making carefully considered decisions about their future long-term best interests; they’re students, and students are often selfish, guided by egocentric desires, whims, peer pressure and perceived preferences. What they are often extremely bad at is prioritising long term needs over short term desires. That’s the nature of humanity. Adults are bad at it too, but kids are worse. That’s the order of things. It’s why we don’t put kids into Parliament, Law Courts, or operating theatres; because we intuitively appreciate that wisdom, experience and nous are required to execute these activities properly. I don’t see a huge rush to put ten year-olds into surgical gowns and give them a scalpel and a set of forceps. Yet.

And what is the perceived outcome of all these lovely student voices? Should schools be forced to act upon it? Are student observations to be graded and counted towards a teacher’s professional development portfolio, or worse, towards a folder of evidence to support pay progression? Should interviewees try to ingratiate themselves to children at the interview panel? Perhaps they should drop references to Tinchy Strider or Pixie Lott to generate synergy.

It amazes me that more people don’t rebel against this revolting inversion of natural roles and hierarchy that has survived thousands of years of civilisation. Only an affluent culture could even begin to consider that we can survive in a world where children are treated as equal shareholders in the decisions that affect the welfare of the community.

So where did it come from? Well, as usual, I point an accusing finger at the DfE, which is responsible for this palpable guff. The statutory guidance (DfES, 2004) requires headteachers, governors and local education authorities to ‘give children and young people a say.’

And that, fellow professionals and interested parties, is the nub of it. Schools are required to show that they listen to this nebulously defined entity called the Student Voice (begging questions: whose voice? Which students are representative?) and worse, that they have to show how they acted upon that voice. It’s yet another example of how the inspection system bullies schools into taking on onerous, odorous tasks that not only replace useful activities (such as teaching) but also impede them.

The lunatics have taken over the asylum, truly. I have no problem with students having a voice, but the problem is that I already know most of what they’re going to say. Comments like, ‘His lesson is a bit boring’ are utterly meaningless to me. Some lessons are boring; sorry, but that’s part of education- not every lesson has Ker-Plunk! and Conga Lines. Sure, I’m interested if there’s a serious issue- an abusive teacher, or one who obviously fails to teach at all- but there are channels for those kind of complaints, properly communicated through parents to the school.

Student Voice is starting to become a shout. And as professionals, we need to put a sock in it before we can’t hear ourselves teach.