The Pursuit of Happiness: Jeremy Bentham, David Cameron and the Principle of Utility 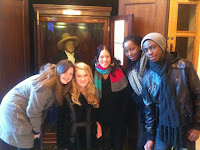 Spent a fascinating afternoon at the UCL on Friday, taking a Platonically Ideal group of A2 students to take part in the Transcribe Bentham project. Jeremy Bentham was a 19th century utilitarian philosopher and reformer who famously requested in his will that his cadaver be dissected, reassembled, stuffed with straw, and dressed for display. This charming paperweight (called the Auto-Icon) is a handsome addition to the foyer of any metropolitan University, and surely the perfect gift for any lonely academic this Christmas; it was also an ideal focal point for a Philosophy trip, which at the best of times proves problematic. You tell me how I organise a fun day out based on Wittgenstein's Tractatus. 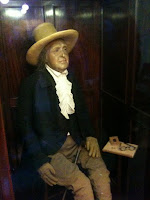 rote 60,000 papers, but only 20,000 of them have been transcribed and studied properly, so it's a Wiki-style project to crowd-source labour, an enormous open contribution that will eventually digitise every nuance of thought the old pleasure-seeker scribbled. I can't recommend it highly enough for any teacher with RS or Philosophy students doing Ethics, and we even had the pleasure of a short lecture from Philip Schofield (no, not that one, you cultural illiterate. This one). Dr Valerie Wallace, the charming coordinator of the project showed us around the campus (including visiting Bentham, sitting imperially over the sit-ins in the University rooms dedicated to his name, and now used as meeting rooms- I'm sure his chest would have swelled with pride, had he still a thoracic cavity with which to do so- which was the sweetened pill before an hour of transcription itself. I have to say, it was a lot more fun than I anticipated, and it concerns me in retrospect how much I enjoyed attempting to read 200 year old handwriting and guess which word Jeremy was searching for. The temptation to transcribe the words 'X-Factor' and 'crowd-sourcing' was, fortunately, resistible.

Bentham's focus was Utilitarianism, a moral philosophy that revolves around the proposition that we all seek pleasure, and therefore pleasure is the commonly agreed good that we all seek; therefore we can distinguish moral acts from non-moral acts by the amount which they maximise pleasure. Or more simply, the good is that which produces the most pleasure.

Why is this relevant 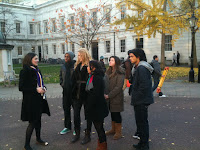 to anyone other than unemployable philosophy nerds like myself? Because David Cameron has been sticking his size 14 Burberry Wellies into a debate that centres on exactly this proposition: that happiness is something that should be measured. Of course, such a project presumes that happiness can in any way be measured, and it's here that Bentham has a lot to say- well, a lot more than PremierBot DavCam. He realised that in order for us to assess whether an action entails more pleasure than another alternative action, we need to be able to quantify happiness in some way. But how do you approach that problem?

His answer was what he called the Hedonic Calculus: a series of considerations that would enable us to quantify and thereby compare pleasure, despite its apparent intrinsically relative nature. The ins and outs of the calculus are beyond the remit of my trivial output, but in summary he asked us to consider the pleasure's intensity, duration, remoteness, fecundity (my favourite, incidentally) and other factors, in order to establish how we should esteem it.

It sounds great, and paying him his dues, it was a massive step in ethics; but the sticking point remains- how do we quantify what will always be an essentially interior experience? If I give 'eating a toffee apple' a 3 out of 10 on my pleasure scale, how does that compare to your three out of ten (which, for all I know, might involve launching a fire extinguisher off the top of Millbank Tower)? It may be easy to compare massively dissimilar pleasures - I can say that winning the lottery is 'greater' than eating an ice cream- but beyond that, we are back in the realms of licking our fingers, holding them into the wind, and saying 'About that much'.

I understand that several million pounds are to be invested in DavCam's 'Happy-o-meter' (sorry, Wellbeing Index). And I think we can all congratulate him on money well spent in these times when a man can barely employ a retinue of photographers and stylists at public expense without enduring the brickbats of an ungrateful electorate which just doesn't understand how important it is for a millionaire to have the right width of pinstripe when he meets the Japanese Ambassador.

It's not that I don't applaud any attempt to dislocate the contemporary dogma that money and happiness are inextricably, necessarily connected- Siddharta Gottama had that much right- but this predictably Pound stretcher way of sticking a pin into how we're all feeling so that we can then graph, track, crunch and pontificate the 'results' is so philosophically flawed as to produce little ripples of nausea in my duodenum just thinking about it. What kind of data does this scheme seek to produce? What correlation can be drawn between patterns (or lack thereof) that might ensue? If numbers fall, does that suggest that we're all less happy? How can an electorate be relied upon to remember how happy they were feeling five years previously, or will they be forced to rely on an imagined perception of how happy they were? Of course they will. Of course they will.

On a scale of one to ten, my visit to Transcribe Bentham was a 7; piling into Waterstone's basement Costa afterwards and hiding from the cold with a Hot Chocolate drove that up to a 7.5. David Cameron's latest agenda grabbing piece of attention whoring?