The light and the dark: Ofsted, Michaela, hope and inspiration

Before me, on my writing desk, are three things: a plaster bust of Socrates, one of Lincoln, and a small pewter Stonehenge. Unremarkable choices- the salariat equivalent of a lava lamp maybe, or the moulded plastic Buddhas beloved of garden centre grottos- but they are mine. It became a shrine by accident. I didn’t plan their purchase or position deliberately. The subliminal architecture of my world threw them together, and they are currently employed as mandalas, or muses, or mementos by default.

Socrates pursued truth beyond all else, for its own sake and, according to Plato, drank Hemlock rather than betray his philosophy. Lincoln is an equally easy inspiration: the great orator, thinker, writer and wrangler for social justice. And I regard Stonehenge with a childish awe, hypnotised by its ancient enigma, a time machine from another planet, speaking of transience and permanence and industry in one brutal monument. It invokes mystery and mysticism and the marvel at the work of human hands.

These physical objects are trivial compared to the mental objects they represent- the ideal form of our aspirations, however far we fall from them, or ridicule ourselves in their pursuit. In Browning’s Andrea del Sarto, the poet writes ‘Ah, but a man's reach should exceed his grasp -- or what's a heaven for?’

If it wasn't for bad luck, we'd have no luck at all

In a year that has already acquired a reputation for withering hope faster than we can gather it, we need all the inspiration we can get. Geopolitical earthquakes send tsunamis of uncertainty around the world in dark and uncharted currents and we are reminded that periods of stability and peace are probably the exception to a violent and less perfect norm. For most of us, these forces rage at a height so high that they may as well be wars in Heaven, and we wait for what chance and the tides wash up.

That’s why we need, more than ever, reasons to believe that things can get better as well as worse. Hope, as someone said, can never be false. If you were to ask most people what century they would like to live in, had they but a time machine, many people’s first answers- Rome at its height, La Belle Époque, the Renaissance, Jane Austen’s 19th century theme park- are usually followed by the qualifier ‘and rich, of course’, because being poor has throughout history been a universal shitstorm. Even then these fantasies are usually discarded after a moment’s consideration, for the less glamorous but more pragmatic ‘Now’ with its medicine and comforts and social progress. Mileage varies internationally, but progress is irrefutable, however non-linear it appears up close.

In education, my own small pond, the news is often wearying, as we read of illiteracy, incompetence, venality and lack every time we open our phones. You do not have to work with children for long to realise that in every room, students carry bruises under their uniforms, physical, emotional, and historical. That for some, progress is measured on a metronome, skipping along, and for others you need a microscope and holy water to see it. Workload buries many teachers; the lash of the inspection and the goad of high-stakes, irrelevant performance management makes many in schools wonder what it was they loved about the job in the first place.

And yet. We all find our own wells of hope. There is good news with the bad. Like the recent clarification from Ofsted that clarifies- at last- that schools need not display extraordinary levels of deep or arcane marking: 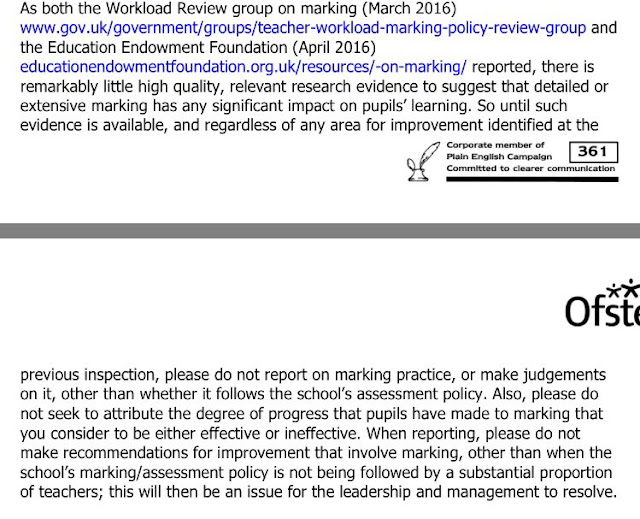 Unless of course schools choose to have marking policies that decimate their staff. And why would they want to do that? This page should be nailed to the front door of every school like the Luther's 95 theses. Marking levels has become abusive in many schools, as they panic to show progress once lesson observations were binned as a metric. This one announcement could, should, be an earthquake in schools practice. I wonder how long it will take to reach every governor and leader in England and Wales?

The Passion of Amanda Spielman

Then there was the mellifluous sound of the Chief Inspector-elect, Amanda Spielman publicly acknowledging that schools in poorer areas were more likely to receive lower grading because of their circumstances, and therefore the assessment of a head teacher’s performance in that context was less likely to be a fair reflection of their competency or efforts.

‘Ofsted's incoming chief inspector has said that the watchdog's overall judgements on schools are not a "fair way" of assessing headteachers' performance. Speaking today, Amanda Spielman said that this was because schools in poorer areas were less likely to get top inspection ratings because they were "harder to run". She said that recent research suggesting schools with disadvantaged intakes are less likely to be rated “outstanding” than those with more privileged pupils, was in part probably a reflection of “reality, whether we like that or not”.’

This is a fantastic sign that Spielman understands the impact Ofsted has, and more importantly will think deeply about how to turn the institution from a sword into a ploughshare. If anyone can, I hope she will.

What have the Michaeleans done for us?

Finally few educators on social media could have failed to notice that the Michaela Community School/ Factory For Turning Children Into Glue and Tears (delete as your ideology dictates) ran a book launch that doubled as a rally for their unconventional blend of traditional teaching and 21st century learning- ultra trads, if you will. Live streamed, tweeted in real time, and punching so far above its weight that David and Goliath look like a fair fight, it represents a new model for how schools face the world. Scorned by people who have never visited, and often admired by those who have, I have yet to see an institution that, in the face of such antipathy, exposes itself so candidly to scrutiny, challenge and frontal attack. It’s almost as if they knew they were doing something extraordinary. Twitter sizzled with their battle cries, and it was inspiring to see so much positivity for a school that has worked hard to earn it. All credit to their head teacher Katherine Birbalsingh, who has two settings, as far as I can see: combine harvester, and dead.

Green shoots, and good news. Maybe even ideas that will bear fruit in the future. Who knows? When all the troubles of the world escaped from Pandora’s box, the last thing left there was Hope. I’ll finish by referring to the beautiful close to the recent masterpiece series True Detective (in an idea possibly borrowed from Alan Moore). The two heroes, Rust and Marty, are discussing good and evil (Spoiler Alert, incidentally):

‘After describing his near-death experience, Rust tells Marty he's been thinking about the stars and how they've reminded him that there's an eternal battle going on between light and darkness. Marty's pessimistic about light's chances:
RUST: It's just one story, the oldest.
MARTY: What's that?
RUST: Light versus dark.
MARTY: I know we ain't in Alaska, but it appears to me that the dark has a lot more territory.
After Rust convinces Marty to haul him out of the hospital, Rust presents a counterargument, offering the final dialogue of the season:
RUST: Y'know, you're looking at it wrong, the sky thing.
MARTY: How's that?
RUST: Once, there was only dark. You ask me, the light's winning.