Project based learning: I'd give it five minutes if I were you 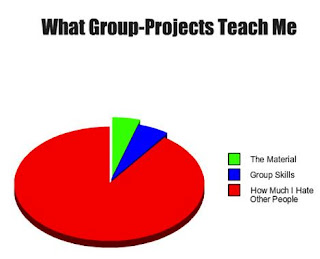 The recent publication by the EEF of their report into Project Based Learning (PBL) [click here] made troubling reading for anyone who enjoys throwing traditional syllabuses in a blender and making a wish. PBL, if you’ve missed is, is:

‘…driven by an essential question which has significant educational content. The projects encouraged pupils to create an ‘excellent’ product through drafting and redrafting and then to exhibit their work to an ‘authentic’ audience.’


So far, so groovy baby. Rather than learn a subject through the clearly bonkers route of 'lessons about it', delivered by a 'subject specialist' in an incremental way, students are invited/ empowered/ inspired/ hugged to death to answer a question through self-guided investigation, to create a ‘product’ that could be ‘exhibited.’ It was recommended that this would take 20% -50% of the entire curriculum for one year. Fortunately we have loads of time spare for this kind of thing in year 7. Wait

What were the findings? Anyone looking for evidence to substantiate PBL would come back with empty pockets from this. The headlines were bleak indeed:

1. Adopting PBL had no clear impact on either literacy…or student engagement with school and learning.


This is pretty damning. Advocates of PBL often start by claiming that it imbeds subject learning more substantially than traditional methods. When that fails to bear fruit. they often turn to less concrete proxies of success such as engagement. If that fails…..As the EEF paper says:

‘It is argued that the freedom and challenge that pupils experience as a result of solving the problems that arise in designing and building their projects result in high levels of student engagement (Wurdinger et al., 2007)’

2. The impact evaluation indicated that PBL may have had a negative impact on the literacy attainment of pupils entitled to free school meals. However, as no negative impact was found for low-attaining pupils, considerable caution should be applied to this finding.


Not encouraging. But caveat emptor- an odd inconsistency between the two, and a sign that the data might be weak.

3. The amount of data lost from the project (schools dropping out and lost to follow-up) particularly from the intervention schools, as well as the adoption of PBL or similar approaches by a number of control group schools, further limits the strength of any impact finding.


This is a huge hole in the bow; so many schools dropped out that the project loses most of its value.

4. From our observations and feedback from schools, we found that PBL was considered to be worthwhile and may enhance pupils' skills including oracy, communication, teamwork, and self-directed study skills.


That word ‘may’ is working harder than James Brown on a kibbutz here.


Translation: this took a lot of effort. Which means you better be sure of a significant pay-off to justify the full spent on take-off.

And speaking of the evidence base for PBL, what did there EEF literature review uncover?

‘The existing evidence for a causal link between PBL and attainment outcomes seems to be weak. Most of the reviewed studies did not involve random allocation of participants to control and experimental groups and, as a result, a causal link between project based learning instruction and positive student outcomes has not been established. The majority of studies were based on a quasi- experimental pre-test/post-test design with some baseline equivalence established for the outcomes measured at the classroom level. ‘

So what conclusions can we draw? At the very least, it offers no support for PBL as a viable strategy, at best. And the evidence base for it is pretty thin- being generous. Given the enormous upheaval it costs a curriculum, the material generation, the training investment required, you would hope to see a high probability of leprechaun treasure at the end of that particular rainbow. But Irish Gold there is none.

And at worst? A suggestion that the least able lose out the most, and for no perceptible gain elsewhere. This data isn’t strong enough to substantiate that. But one has to wonder why schools dropped out so significantly. In my experience schools often do this when they feel a project runs contrary to schools needs, it obstructs improvement, or there are signs of engine failure mid-flight. Or they were promised magic beans and realised they just bought a cow.

My experience tells me that these kinds of educational approaches aren't without value, but frequently work best with the most able, independent and informed students. Those struggling already, behind in content knowledge, dealing with challenging habits, fall further back than they otherwise would in a more structured environment. And if we’re designing schools and syllabus for the real word, that means teaching everyone well, not just a fraction of the lucky sperm club. So until we start finding out that PBL miraculously adds value to the school experience rather than robbing it, I;d give it five minutes if I were you.
Email Post