The London Festival of Education: Good, with Outstanding Features. Part 1 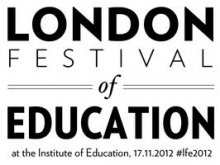 London's first Festival of Education roared into Russell Square this weekend, hosting the capital's yoorban answer to Wellington College's fragrant mother ship. The Institute of Education, which hosted the event, is a great college inside a building that makes the elephant house at London Zoo look like the tea rooms at Kew Gardens. Stalin would have taken one look at it and said, 'Blimey, that's a bit brutal.'

I'd been invited to do my monkey dance in a Q&A on behaviour which gave me the double pleasure of participating and observing. Apart from comedy support acts like me, the organisers had pulled their fingers out and hustled up the biggest names in education- Sir Michael Wilshaw, Adonis, Charlie Taylor, Hattie- and even the Lord of Sanctuary House himself, Gaffer Gove. The headline act opened the show, in an inversion of normal rock gig chronological taxonomy. Logan Hall was packed to the rafters in a manner that normally only happens when PGCE students turn up for their annual lecture on behaviour management, if memory of my own PGCE serves. This was a Saturday morning, remember. It was the edu-equivalent of One Direction signing arses in Bluewater.

As Marx once said, 'You have nothing to lose but tiers of local bureaucracy.'

The mood of the crowd was...well, let's be honest, crowd moods are usually variegated, aren't they? It was the world's biggest staffroom: a few angry Trots wearing Michael Rosen masks*; a sprinkling of old-timers, part-timers, time-servers and first-timers. Some stalwarts decided to spend their Saturday morning outside the IoE handing out pamphlets and wearily waving a fairly piss-poor effigy of someone. You knew was meant to be Michael Gove because there was a note pinned to its straw chest that said so, in the manner of a satirical cartoon in Punch.

Gove is famously personable and charming, and so it proved. He was interviewed by David Aaronovitch who promised to be a spiky and intelligent host. Aaronovitch's father, Sam, was a prominent Communist. As a member of the 1975 Manchester Uni team on University Challenge, he answered every question from Bamber Gascoigne with 'Trotsky', 'Lenin,' and so on, in protest against Oxbridge colleges being allowed to enter the competition separately. Nowadays people just get pissy about voting protocol when the X-Factor judges go to deadlock, but back then, game show protests were cold war arenas for class struggle, it seems.

Aaronovitch offered a polite but firm rebuke to the Secretary of State's vision of the educated student, homing in on the predictable, but important saws of access, privilege, entitlement and offer. But the Grand Wizard of Surrey Heath did not, it is fair to say, fall off the back of a turnip truck, and he cracked every ball back efficiently enough. He was even wearing a tie as red as the spilled blood of revolutionary martyrs. But his master stroke was pulling out a book on British Communism from the fifties and quoting appreciatively about the sacred shrine of books that every home should have. For a moment I thought he would extend a black-gloved hand out to a weeping Aaronovitch and say, 'David....I AM YOUR FATHER.'

Every time Aaronovitch said something like 'Isn't it true that you plan to boil G-grade students to make soup stock?' Gove would nod appreciatively and say, 'Yes, you're absolutely right, I agree,' before then launching into his calm and careful refutation. It had the effect of making the discussion seem enormously consensual, and gave Gove the air of a man who was absorbing the interviewer into his own argument. All you have to do is leave out the word 'but.'

There was a bit of Poland, which appears to be the new Finland (take a shot!); a bit of vocational banter (Gove, quoting Blair: 'If you ever want to declare war on Iran, do so in a speech about vocational education.'); a bit of 'Why do you hate teachers?' and so on. One blade asked why Academies terms and conditions were so bad, and was sent scampering with the reply, 'Teachers in academies earn more,' which if true, is a Trump Card. He said 'Once you go to an academy, I've never seen anyone go back.'

Of course, a dialogue is less scripted than a speech, and a Q&A less still. There were, of course, the usual sad sacks who somehow imagine that 'asking a question' means 'tell us your life story and put a question mark at the end.' It was also an opportunity for a bit of tub thumping. In his answers we saw more shooting from the hip. Some answers possessed his usual precision, others pressed the predictable buttons on a few in the audience who were wriggling for a fight and a sound bite they could hate properly.

He gave them it when he said, 'You can't have education without assessment', and some of the crowd visibly quickened, taking their safety catches off. So far, so reasonable: what country would invest 5% of its GDP on something without a means of regulation and evaluation? Then, the House of Commons pugilist came out as he added, almost an afterthought, 'Without assessment, it just becomes play. We need to know.' Cue: Oktober Revolution. 'What an idiot!' hissed an unhappy woman behind me. 'A fucking idiot.' A great deal of rhubarb, rhubarb followed.

Gove was unbowed; instead of retreating he advanced. Answering the challenge that focussing on the Ebacc would kill off the arts, he replied that he hadn't seen a single academically excellent school that didn't; also promote outstanding arts and sports - which is probably true, although when asked if that was true in Singapore, his reply that they had lots of after school clubs prompted  snorts of derision from a lot of people who, apparently, knew the Singaporean school system intimately.  There was a question from a woman who rocked our worlds by saying, 'Bonjour Monsieur Gove,' and everyone clutched their partners and thought, 'My God we're somehow in France'. She wanted to know if Gove valued 'Community Languages,' and he scored points by explaining to Aaronovitch what that meant. He just emphasised how important languages were in general, sidestepping the whole 'Why don't you teach Urdu?' argument quickly. Mainly because there isn;t anything you can say about the topic without alienating someone.

He explained why RS wasn't in the Ebacc by referring to its existent state of being a statutory subject in all schools, out with of the National Curriculum, and he didn't want to unpick too many stitches otherwise the whole tapestry would fall apart. Aaronovitch made a funny face and pointed out that Gove didn't normally seem too bothered by tugging on the odd thread with all his might. But no politician wants to either drop RE completely, and lose the entire religious vote, nor defend it too openly, alienating the secular demographic. Leaving things alone and not talking about stuff is the safest bet for a man who answers to a ballot every five years.

Somebody wanted to know why he insisted on demoralising schools by using critical language about some schools, and there were nods from a few; he responded by saying, 'There are schools that aren't good enough and my job is to point out that some schools are inadequate.' Which seems fair enough. I scratch my pointy head at people who get upset when someone in charge of something criticises the status quo. What's the alternative? Say that everything is great? Clearly it isn't so, and if the Boss of Schools said it was, I'd think he was a bit simple.

By the end, he probably hadn't won over any hard liners, but he probably didn't make too many enemies either, and possibly showed a few that he, just like them, wanted the best for children and schools. Aaronovitch's earlier point that he wanted to simply replicate his own school experience could be answered by saying, 'Well, good: I wish everyone got the chance for such an education,'. The educational debate polarises so easily in this country that it practically shatters into two suspicious satellites, revolving around each other in perpetual enmity. The truth is that both camps have more in common than they think; there are no enemies of children in this discussion, simply two tribes, going to war.

Later on, I congratulated Chris Husbands on the Festival, and he replied, 'It was 'a hairy ride, but worth it.'

At least I hope he was talking about the Festival.