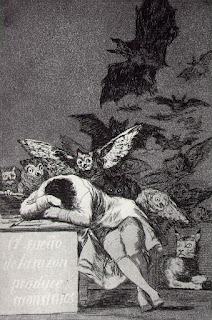 I am outraged. I'm fuming. How can people be so insensitive? They should be ashamed of themselves.

In fact, I'm so outraged, I think I might be able to wring a decent article out of it. The source of today's horror is the news, reported in the Telegraph, and no doubt coming soon to a media outlet near you, is the news that in the recent AQA Religious Studies exam, they had the temerity to ask this question:


'Why are some people prejudiced against Jews?'

The Jewish Chronicle led with this; Michael Gove jumped in with his size 12s. Lou Mensch hit Twitter like it was being rationed by Francis Maude.

He told The Jewish Chronicle: “To suggest that anti-Semitism can ever be explained, rather than condemned, is insensitive and, frankly, bizarre. AQA needs to explain how and why this question was included in an exam paper.”

I had to rub my eyes a few times to make sure I was reading that right. We can't question why prejudice occurs? We can't try to understand the frankly obnoxious reasons that people might discriminate against any segment of the population? We can't try to unpick the stitches in racism, anti-Semitism, or hate-thought?

How utterly, utterly, endlessly, bottomlessly appalling. Prejudice needs to be challenged; it needs to be understood; its brittle bones broken. The fog of discrimination grows darker in the shadows. It doesn't emerge, like a miasma, from nothing. It is a primordial soup of ignorance, half-truths, fear, cruelty and imagined injustice. Suggesting that the only appropriate reaction is to condemn it, does the reverse; it condemns us. I have been to Auschwitz several times; after the abysmal anti-life that this place represents, many were inspired to say, 'Never again.'

Well nothing is dispelled by treating it as something transcendent, mystical and unintelligible. You analyse and confront; you do not retreat into dogma and simplifications. The German people are not inherently evil, nor were the people of Rwanda, Serbia, or any other ghastly gardens of genocide and intolerance. Hate is not defeated by ignoring it, or pretending it arises ex nihilo, like a genie. Understanding it takes us a step towards dispelling it. Refusing to even question its origins is a step towards ensuring that it perpetuates like gangrene in the wounds of the world.

This was a valid question, and always will be. I teach RS, and I have always- and will always- expect my students to understand why humans can hate each other. AQA understood this when they set the question; good RS teachers understand it when they teach and discuss it. Rentagobs, manufacturing outrage are the enemies of wisdom. This question was well-worded, and anyone free from a fetish for headlines and populism can understand that this question, in this context, wasn't just permissible, but vital; urgent.

Sometimes I feel that we are doomed to repeat our mistakes. Sometimes, as someone who tries to help students understand why reason sometimes dislocates in favour of race-hate, I feel so weak in the face of the cyclical nature of ignorance and ugly sentiment. The faux, proxy offended play to the sentiments of the bigoted when they classify all explorations of racism as racist.