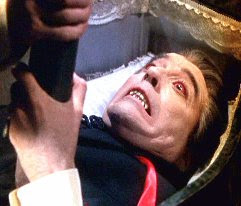 Michael Gove has become an unlikely ally to the teacher; as of yesterday he announced the death of the SEF! Like a hideous vampire, this awful beast has roamed through the villages and cities of our schools, terrifying teachers (actually, boring them to death) and providing Head Masters with something to actually do since 2005. But now the beast has been cornered in its castle, and Gove has made official what teachers have been saying since this hideous piece of bureaucracy was dropped, unwanted from the loins of its laboratory origins: the SEF is an enormous waste of teachers' and schools' time. Here's how he drilled the stake into the monster's cadaverous heart:

'Education Secretary Michael Gove today announced another step in the lifting of the bureaucratic burden on heads and teachers. The school Self Evaluation Form (SEF) process takes days out of heads’ time and can cost schools tens of thousands of pounds. The Secretary of State has asked Ofsted to ditch it. It is the next stage in a rolling programme of reducing bureaucracy for teachers and trusting them to get on with their jobs.

The SEF asks teachers and heads to collect and verify facts and figures about their school in preparation for their Ofsted inspection. Headteachers say it can take many long hours to fill in and take teachers out of the classroom for extended periods. It can run to over a 100 pages once it has been filled in.

This rolling programme will continue into the autumn as ministers engage with teachers and frontline staff on their plans to give them more power and remove the form-filling and bureaucracy that takes them away from the classroom.

The Coalition Government trusts teachers to get on with their job. That’s why we are taking steps to reduce the bureaucracy they face and giving them the powers they need to do a good job. We believe that teachers – not bureaucrats and politicians – should run schools.

The removal of the SEF was welcomed by teachers.

Removing the SEF will free up huge amounts of time – many heads spend most of their summer holidays updating the SEF, then you would need at least two or three senior management meetings to discuss it.

Just to update the SEF took up two full days of work for the head, deputy and a paid external consultant brought in as an expert on filling in the SEF.'

Everyone back to mine. Bring some petrol and a book of matches. And some booze. We're having a SEF bonfire!!!

This is almost as good as it gets for teachers, so make the most of this moment, before someone in the DfE thinks, 'Why don't we make it compulsary for all teachers to learn Gaelic' or something.