How we solve the behaviour crisis part 1: What the problem is, and why some people can’t see it 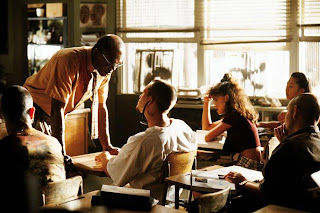 I was watching 187, an odd but strangely moving film where Samuel Jackson plays a teacher tormented by his gang-banger students, and I was reminded of Picasso’s proposition that ‘Art is a lie that makes us realize truth’. Jackson works in a downtown LA sink school, where the teachers pack heat in their desk drawers, the kids are screwing in the portocabins, and the head is so allergic to civil action that teachers are ground to a paste by the indifferent cogs of bureaucracy. Sometimes the line between truth and fiction is diaphanous.

I normally shy away from magic bullets. Complex situations are usually immune to simple solutions. But there's something obvious about schools that I noticed the first day I started training, and it hasn't gone away: behaviour problems crush learning, and strangely, many schools don’t seem to know what to do about it.

Apart from that, did you enjoy the play, Mrs Lincoln?

I often hear people say that behaviour isn't so bad. That there are pockets of unruliness, but on the whole the view has a rosy, crepuscular glow. For example, former Behaviour Czar Sir Allan Steer said in 2009 that:

‘...there is strong evidence from a range of sources that the overall standards of behaviour achieved by schools is good and has improved in recent years. The steady rise in standards needs to be celebrated....the great majority of schools are successfully achieving satisfactory or better standards of pupil behaviour…’


Learning Behaviour: LESSONS LEARNED A review of behaviour standards and practices in our schools. Steer, Alan, 2009

On the surface that looks encouraging- very encouraging. So why do many teachers disagree?

Actually, it is quite bad

'There is mixed evidence on the extent of poor behaviour reported by teachers... However, another earlier survey showed 69% of members of the National Union of Teachers (NUT) reported experiencing disruptive behaviour weekly or more frequently (Neill, 2001)'

I’ll add that almost every teacher I’ve worked with as a behaviour coach would agree with the latter paragraph, and more personally I’ve never been busier advising teachers crushed by their own realities. I propose that inspection data cannot be relied upon to reveal the true behaviour situation in a school for the following reasons.

1.Senior teachers and middle leaders start hyperventilating about inspectors seeing naughty kids, in an anxious version of the Hawthorne effect. The worst pupils often vanish for a while, mysteriously hidden on trips and temporary exclusions. Staff curiously appear in corridors they haven't walked down in weeks, maintaining order. Often students respond to the observation effect by sharpening up as well.  No, an inspection isn't the best time to see behaviour. Like quantum scientists, the observer affects the experiment.

2. Another reason why there is such disagreement about the extent of the behaviour crisis is that the people who think there isn't one usually work in an entirely different school from those who think it does. Not physically different; there are often several different schools in the same spot. Take two teachers: one has seniority, either of rank or tenure. Known to all pupils, enjoying high status, with a light timetable and a career built on the kids knowing what they can do. They usually have plenty of time to catch up with behaviour issues. They might have the privilege of easier classes. They definitely don't have to grind from class to class with barely a breath in between. The second teacher belongs to a lower caste: new teachers, junior teachers, supply teachers. They work in a parallel universe to the first teacher and his kin. Kids mock them, refuse their wishes, and do what kids do to unfamiliar or uncertain adults. That’s what I mean by a behaviour crisis. Every school is at least two schools, alternate dimensions, layered over each other, barely able to conceive of each others existence.

3. Consider this: the groups who say there isn’t a problem are mainly composed of people who don’t have to teach difficult classes: inspectors, senior staff, researchers, teachers of biddable communities. The groups who say there is a problem are usually the ones who experience highly challenging behaviour. The former tend to occupy positions of authority and get to write the reports. The latter don’t get asked very often.

Can you see the problem?

Part II coming soon: How we solve the problem

Picasso: Fifty Years of His Art by Alfred H. Barr Jr., published for The Museum of Modern Art by Arno Press, New York, 1980