Everybody be cool. Why the EBC is nothing to be scared of.


I have noticed that whenever things change, my pupils often resent it: a new teacher; a different room; a new pupil in the class. Then people get used to it and everyone calms down until things change again, and then we all get upset and pine for the good old days. It's like when they change the layout of Facebook.

In a different league, now we have EBCs. Man, people are lining up like Swap Shop presenters in mufti at the ticket counter of Heathrow to have a pop. It's the most fashionable piñata in town. Anything that unites the NUT, Ofqual, Graham Stuart, Michael Rosen and Tory backbench unspectaculars has to be something special. But behind the light of the unhappiness, is there any heat? I'm not so sure there's anything to fret over.

1. Having one exam board might destabilise the industry. Frankly, I'm not too bothered that Ofqual worries about this, because I'm left wondering why examining students needs to be an industry, rather than an enterprise for the common good.This is one of those areas where you don't want competition, where you don't want a Darwinian race of survival based on self promotion. The gory sight of exam boards pimping out their syllabuses for the love of money should have turned your stomach by now on this matter. Oddly enough, I hear many left wing commentators worrying about this absence of competition.

2. Some have complained that the EBC will kill creativity. This seems an odd proposition, given that English, one of the core subjects, is an incredibly creative, critical, analytical subject, and that creativity can be learned through any subject. Are we saying that maths can't be creative? Plus, when schools actually stop teaching art and PE and Drama, instead having timetables full of nothing EBC subjects, I'll believe the claim that schools will drop them. People are naturally creative. You can hardly stop people being creative. It's in everything, everywhere.

Oh, and forgive me for not really giving a monkeys what Stella McCartney or David Puttnam have to say about education.People often complain about non-educators sticking their oar in, but become suspiciously supportive of it when it's a sleb with whom they share an opinion.

3. This is a return to the 1950s. Give. Me Strength. For a start this isn't an argument, and I'm still perplexed as to what people actually mean when they say this. But then it isn't an argument; it's a sound bite, and people should be ashamed of making it.  Empty of content, it sounds like it might have something plausible underneath it, but it doesn't. It's rhetoric, sophistry.There is a good deal in education since the 60s that needs a long walk from a short plank: Brain Gym; Thinking Hats and so on. Because education isn't a science, improvements are neither incrementally guaranteed not linear. These reforms aren't a return to the 50s, and even if they were, I have no problem with men wearing hats again, or films by Alfred Hitchcock. Modernity isn't the womb of quality, nor is innovation a guarantee of improvement. See: onesies for details.

4. Others have problems with linear exams, with fewer options of retakes. I've always seen modules and resits as the snooze alarms of assessment. 'Five more minutes' the students say. 'Then I'll properly start revising.' If everyone gets the same opportunity, then everyone has the same chance at the outcome. Allowing successive bites of the cherry simply skews the benefit towards other groups, for example 'People who don't fancy coming into their lessons on Monday morning.' 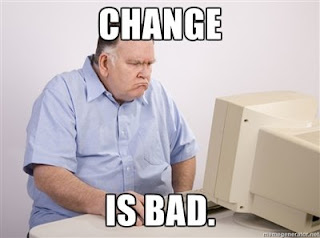 But the best argument of all is to look at the state of GCSEs. They are, as they stand the walking wounded. 30 years of grade inflation. Years of lunatic BTEC equivalence. Successive, incremental, Darwinian dilution of content in favour of vapid, vague skills that rely on content to exist but ironically are starved of it. Reform or replace, the outcome is the same. The system needs to change. The venom directed at certificate reform is what we could expect of any change in the system.

You wait. If it gets a chance to bed in, give it fifteen years and people will be out on the streets with placards campaigning for its preservation if anyone dares to meddle with it.The EBC might be fantastic. It might be the Ragnarok of civilisation. But the arguments levelled against it don't convince.