Step back in time: The Chamber of Secrets, Dungeons and Dragons, and saving children from Satan

I uncovered some weapons-grade gold this week: under a stack of boxes, unmoved for decades was a dusty, discreet red book, innocently titled 'RS Department Minutes 1980 ff'. It might sound unremarkable, but to the steam punk edu-enthusiast that I am, it was crack. To me it was a time capsule, a message across the decades from one teacher to another. I've even been reading it in bed, that's how good it is. Like a prospector hand-sieving lakes of dirty water, much of it is as gripping as a Ukrainian phone book. But every so often, a flake of purest magic gleams in the silt. Now I can see why Tony Robinson spoils his knickers whenever someone pulls out a grimy sliver of pottery from an dismal ditch.

1980. Imagine the world then: Jimmy Carter signs a $1.5 billion bail out for Chrysler, and the USA boycotts the Moscow Olympics; the Iranian embassy in London got its clock cleaned; and Jimmy Saville's chair was the relic of a saint as opposed to an emblem of disgrace. The Berlin wall was still mercifully unaware that David Hasselhoff would conduct a concert from its apex, years later, as a final humiliation for Communism. Duran Duran signed with EMI; and in Glasgow, an eight year old boy sat at a desk, waiting for blogging to be invented. A world as alien and intimate as 2044 is to us.

It's a fascinating chronoscope; a window in time. It feels like the Diary of Tom Riddle, and at any moment I'll tumble through the fourth dimension and land in a world where Pac-Man is just arriving in pubs, and I have to avoid meeting myself in order to prevent the end of the galaxy. I could write a book about this book: this is a reality before Ofsted; before the National Curriculum; before Citizenship and VAK, levels and damned sublevels; before unsatisfactory and 21st century learning; before flipped classrooms and robber-baron consultants.

There's too much in there to cover in one blog: for instance, there's a report from the Inner London Education Authority (which I believe Boris has, just this week, floated the idea of a resurrection, because few politicans can resist the lure and bait of autonomy for long. A devolved power doesn't last long when someone reckons they can scoff it themselves) to the school, a sort of Ofsted report. The staggering thing about this is the level of detail and effort that's gone into it, as opposed to the cookie-cutter approach these days where the inspectors essentially decide the school grading in advance from the data, and then look for the evidence to confirm it. There's an enormous amount of discussion about O-levels, the rise of multiculturalism, secularism, and also, to be fair, stationery. The whole damn thing is typed or written, in an era when only NASA could muster a word processor. It really is a very impressive piece of book keeping. 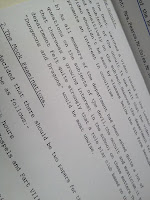 Another time for all that. What caught my eye last night was an excerpt from an RS department meeting, which is a joy to read, and read around:

'...all members of the department had been asked quite a lot of questions on the subjects of the devil, the occult and mysticism; it seemed there was a growing interest in the school on these matters. The department felt that a role play club based on the game, "Dungeons and Dragons" would be most unwise.'


I was hugging myself with pleasure at this. Oh for an era when Dungeons & Dragons was the most worrying cultural influence on our children. In 2012 if a kid hasn't seen 2 girls 1 cup by the time they finish primary school, they're deemed to have had a sheltered upbringing.

Dungeons and Dragons (D&D), as the less popular among you will know, was part of the role-playing game phenomenon, which now seems impossibly quaint and old fashioned to a generation used to Grand Theft Auto, Skyrim and Resident Evil. Essentially a Lord of the Rings rip-off, you pretended to be a wizard, a warrior, a thief and so on, in entirely fictitious scenarios generated and administrated by a 'Dungeon Master (DM)'; you would be expected to face challenges and battles using spells, weapons and wits, moderated and circumscribed by game rules. The element of chance was delivered via a series of spectacularly silly dice: four, eight, twelve and twenty sided shapes.

Has the internet been invented yet?

You would sit around a table and glumly act in character as you navigated the imaginary perils the DM put in front of you. Like this:

DM: You are in a dark room, with a treasure chest and a coffin in the corner.
You: I open the coffin.
DM: *rolls odd die* OK, it opens. A MUMMY jumps out at you, groaning *makes groaning noise*
You: My character says 'Go back to the eternal rest from which ye spawned!' I cast a Fireball spell at him.
DM: *rolls some more dice* OK, he's toast.
You: Does he have any treasure?
DM: He might have had some, but the fireball melted the whole coffin.
You: Aw, man! Is there any more Pepsi in that glass?

Etc. It was a lot more fun that it sounds, maybe. Essentially it was a way for young nerdy teen boys to get together while they poured over complex books of spells and rules, drew monsters and improbable damsels with dimensions that would require scaffolding to support. It was almost always boys, in my experience. Perhaps girls had grown out of playing Let's Pretend by then. But it was sociable, and added meaning to endless nights drawing comics, writing cod-fantasy stories, and pretending to save the world, night after night. These days being a Geek has been rescued from opprobrium by virtue of the fact that geeks grew up and colonised the media. Now, it's so hip it's commonplace.

Not in 1980. In 1980 if you were a geek you were marked with the sign of Cain, and no one would go see Smokey and the Bandit 2 with you. Believe me. So we did what sub-cultures have always done; banded together. Which is exactly how vulnerable, sensitive children who read Le Guin, Moorcroft and Burroughs but who lived in goals and never got picked for the team have survived. If you're lucky, you invent Microsoft; if not, you spend your life hiding your comics and queueing for autographs at sci-fi conventions.

(On an unrelated note: I tweeted this week that I thought Red Dwarf was, to be honest, a bit pish. Five minutes later one of the writers of the thing had retweeted me to his army, and I spent the rest of the night watching as pale-faced, unshaven, grown men filled my timeline with poorly punctuated insults. Given that I hadn't  @ed the chap I presume he must have been scouring the timelines for references to his masterpiece theatre. I only hope that, in the dystopian future of Red Dwarf, it's still OK to dislike fart jokes and say so publicly. Smoke me a kipper! Hilarious.)

Do you renounce Old Split-Foot?

The idea that teachers could save children from El Diablo by preventing them from role playing as Caradoc the half-elf magic user now seems twee beyond expression. And with apologies to my predecessors (all of whom had immaculate administrative skills) I hope they never see the lessons I do on Wicca, Norse Gods or the Gods of Mount Olympus. I even, in response to a class vote, made a lesson on Dawkins, Hitchens and Bertrand Russell, and we debated atheism. Next week we'll all be raising spirits like the Witch of Endor and attempting to kick-start our broomsticks. Or not.

It would appear that the geeks did inherit the earth. I can only imagine what my predecessors would have made of it. Sorry.