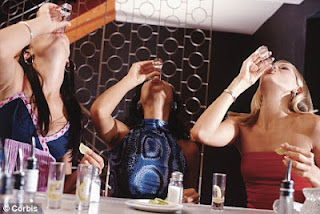 Is there a portion of the calendar that lends itself more to metaphors of breathless, giddy excitement and vertiginous, libidinous, shivering thrills than the conference season? NO, READER, THERE IS NOT. As I watch the keynotes, particularly the education keynotes, I am torn between the poles of drowning myself in the bidet and attempting to feed myself into the toaster from the head down. That's how barely I can contain my quivering heart.

But. Just in case you wanted to watch them again when the DVD comes out at Christmas ('Now that's what I call a conference education speech volume 33'), here's a game that you can play with all the family: FINLAND! The Party Conference Education Speech Drinking Game™ . Simply start the evening with a full table of ASDA's finest hootches and moonshines, charged glasses, and press play. Last person standing wins a lifetime supply of ennui and schadenfreude.

Speaker refers to the scarcity of 500 year-old oak trees in their childhoods: take a gulp, and look up 'odd' in dictionary
Somebody falls weeping to the ground, touching Stephen Twigg's hem to be healed: empty glass of communion wine
Michael Gove shows a millisecond of self-doubt: empty glass, replay, freeze frame


Camera cuts to elderly delegate, fast asleep and snug in a blanket: take a shot of sherry/ port
Bored cameraman attempts to find attractive delegate- fails: Take a drink and email Guardian
Bored cameraman attempts to find attractive delegate- succeeds: Take a drink, turn back to the right channel
Speaker suggests link between Free Schools and National Socialism: Take a schnapps; salute
Gove refers to Unions as 'Dem Babylon': select a bottle, drain to the hilt
Specific teaching method disparaged as Victorian by someone who has never taught: drink bowl of own tears
Attempts to mangle a joke out of the word 'PISA': drink continuously until sentence is finished

Unsuspecting teacher/ student/ patsy dragged out onto stage to do monkey dance: ramraid nearest Threshers, demand a helicopter to fly you to Singapore
Finland is mentioned: drink EVERYTHING on the table!

*Thanks to @captainrobs for inspiration