What's red and green and pointless? The endless, anxious debate about the colour of marking. 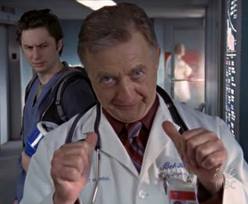 
I'm not James Randi, and I don't have a million dollars, but I bet anyone a pint that they can't produce meaningful research that shows that the colour of the pen has any significant effect at all. I suspect my pint jar is safe from the toffee hammer for some time. In the meantime, I'll be choosing to mark in red as much as humanly possible, more in spite of the apparently still current dogma than for any other reason. Mind you, it stands out nicely against all the black ink of my student's work.
Plus of course I tend to write in human blood. I like the connotations. It shows I care.
Email Post
Labels: Bad Science educational myths European Journal of Social Psychology green ink marking red ink research