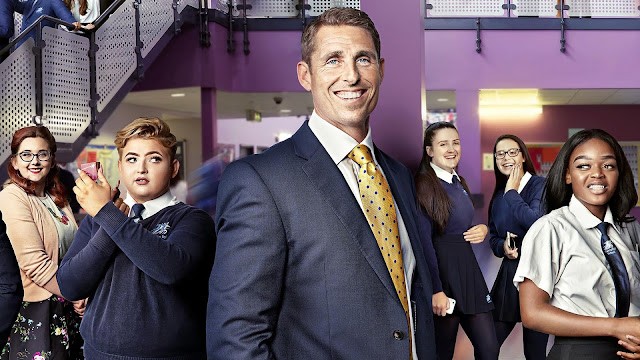 Every successful series has a problem: carry on until everyone hates you  (see: 24), or leave them panting (see: Mad Men).  Remember Happy Days, the once-world-conquering period sitcom that outstayed its welcome, and desperate to keep feeding laxatives to the goose with the golden eggs, wrote the cast into new, odd narratives. Magical midget mojo Love God The Fonz memorably ended up water skiing over a shark, in scenes as far removed from his character's core as Freddy Krueger baking cupcakes in Justin’s House. The phrase ‘jumped the shark’ was born, and has not, as yet, jumped the shark itself.

So, has the Educating [insert geographical locale] series jumped the shark? Not yet, if this season's opener is anything to go by. Previous series had been entertaining, often moving, but there was a sense that after their spectacular Essex opening act featuring teacher demi gods like the Buddha of empathy Vic Goddard and Stephen Drew, shoeless standards Samurai, subsequent seasons were photocopies of the last one. Yorkshire (when you’ve watched them as closely as I have, you get to dispense with formalities) defined the high tide of the series’ emotional aspirations as it brought us the unforgettable combination of Musharaf, the adorable teenager who could, and his sardonic, witty mentor Mr Burton who helped him start to overcome his stammer. East End and Cardiff were very good teacher telly indeed, but there are only so many times you can watch the Broken Child Healed By Hope (BCHH) without wondering if there were any other stories to tell.

Thankfully, it feels like- so far- there’s been an attempt to mine more subtle seams. And so they should. There are a thousand pebbles and diamonds in every school, and we need only pick one up and look at it from a new angle. So, what's new?

Well, it's geographically accurate this time: Salford is indeed Greater Manchester, although it leads to an lumpy title. Maybe they should have sick with Manchester and just borne the apoplexy of purists on social media.

But better, this time the series has started to look at something that every school serving pluralistic communities knows too much about: racism. And more: bullying, intolerance, and the often unpleasant views that live a millimetre beneath the skin of many pupils- and sometimes, staff. This was a huge risk for the producers to take, and an even greater one for the school. There is a little to be gained from participating in this fixed-rig circus, and much to lose. Even Goddard, who came out looking like Moses, admitted that there were swings to each roundabout. Add to this gelignite soup the need to safeguard the students, and we have a rhino pogo-sticking blindfolded through a minefield in the DMZ.

But I think they pulled it off. Migration, integration, and the concomitant possibility of disharmony are the narrative equivalent of playing Operation! drunk. It’s like Eastenders, home to the only East End pub and market where no one uses racist epithets. Maybe understandably. I’ve been to dozens of schools where ethnicity determined community, and worse, defined territory, perceived antagonisms and loyalties. I’ve seen students openly drop racism bombs you hoped had died out with the Doodlebug, and more commonly, heard students unquestioningly trot out the anxieties and callous pieties they could only have learned at their own hearths. I teach Religious Studies and Philosophy so for years I’ve heard pupils express and examine these beliefs, sometimes, openly, sometimes secretly. So I’m not shocked to hear the values and truths pupils often cleave to. I’m just surprised it’s taken so long for TV to get near it.

We meet Mr Povey, this season’s Head teacher, who looks like a haunted Tom Cruise. Every Educating [x] head has this Cromwellian certainty in their eyes, fathomless ambition and enthusiasm. Which is understandable given how mad you would have to be put your heart’s work under a microscope like this. He drives in (with his bruvvers, no less) to Harrop Fold School which has struggled with debt and achievement issues, but now looks poised to flourish.

Remember, Vic: you make the weather


This week we were introduced to Rani, a boy newly arrived (last term) from Syria with his famly. One can only imagine the desperation that drives a family to leave, possibly forever, from the land of their ancestors. Some kids, when asked what they did last Summer, talk about Thorpe Park and Camber Sands; Rani spoke about seeing guns, violence, explosions every day. And even in his refuge, he had walked into further indignity: bullying, the defining vice of the vicious. We saw Ms Bland, head of student support, trying to mend the brittle shoots of Rani’s embryonic relationships with his aggressors. It’s a delicate, fragile thing to do: over mentor and the boy never grows past his shadow; under support and he's crushed by the combine harvester of cruel circumstance.

We saw a carousel of talking heads, which I thought was interesting. Some pupils expressed sympathy with their migrant classmates, but it was remarkable how quickly some of their views turned to traditional bogeyman saws like housing, jobs. No kid ever worried immigrants are coming to take their jobs, just grown ups. And of course, every one of those kids had names you could trace back to migration, recent or historical. Not a Pict or Ancient Briton among them.

One girl even said, kindly, ‘We’re all in the same boat,’ which was sincere and compassionate. But others arrived on entirely different boats, like Murad in year 10, also from Syria. A Kurd from Alleppo, he arrived on a two-hour night raft to Cyrpus. ‘You didn't know if you were going to die,’ he said.

And the most difficult thing for him that he remembered when he arrived? ‘Bullies’, he said without hesitation. Can you imagine that? After running from Hell and braving a second watery Hell to do so, the thing that stood out the most from his arrival was the ghastly tribalism of people who should have been his neighbours and his hosts. I get a strange feeling of shame when I hear about guests and the newly arrived to these shores encountering random, idiotic cruelties and capriciousness, as if some unspoken law of hospitality had been breached. New additions to our communities deserve better.

And good schools like Harrop Fold do their best to make that come true. Murad was assigned to Rani as a mentor, and the sincerity of his desire to nurture and protect the wide-eyed new kid was touching. ‘if anyone touch you you tell me, he said, and suddenly Rani had the coolest, tallest bodyguard a boy could with for.

The school helped even more by putting Rani, not in at the deep end, but through a nurture group for the first few weeks to help him acclimatise. In a scene designed to slay UKIPers everywhere with rage, he even took the class through Salah, the ritual Muslim sequence of prayer. Five years ago that would have been the headline in the tabloids the day after. This time, nothing. Maybe that's progress.

Then, it was time for him to graduate to mainstream lessons. Would he be ready? Was school ready for him? Happily it was, in no small part due to the superhuman conviviality and congeniality of Jack, an equally tiny avatar of hospitality and welcome. Jack was one of those rare kids who walks towards the lonely, shy, marginalised kid instead of walking away, or worse, walking through him. His persistent, gentle hand of friendship is the stuff Disney films are made of. No wonder the pair of them toured the telly breakfast sofas all last week. And then we saw Rani’s final upgrade: the proof we needed that he was one of the gang and ready for bear: unbidden, he went up to a grimy utility van in the playground and finger painted the word FOCK on the sooty back door panel, like a miniature Stan Boardman. No matter how badly behaved it is, that is never not funny. That broke the dam, and within seconds the van was covered in the ubiquitous cartoon phallus (variant: spurting lava) and every other swear word known to school boy.

Mr Povey did his nut. Rightly. Life is full of paradoxes. Cartoon knobs and FOCK have a comedy that endures until the stars run cold, and vandalism can’t be tolerated in a civil community. I loved his turmoil spilling out in interview as he acknowledged that he probably did a few like that in his own time, but…That’s the burden of adulthood, alas. You think it’s going to be all staying up late and Christmas Cake for breakfast. Instead you end up telling kids off for writing 'Wash me'.

And from a behavioural point if view, what he then did was interesting: he shouted for ‘every student who drew on the van’ to turn themselves in. And amazingly about half a dozen did. Now call me an optimist but that's some kind of healthy community he has there if students are so good they’ll 'fess up when they don't have to. Even Rani started to beetle towards the doom of honest boys until his mates- for they were now his mates- stopped him. ‘You didn't even write on it!’ they reasoned, believing themselves as they said it. And Rani learned a lesson about double-think, and getting away with it. He probably deserved it.

Talking of hositality, Jacks mum seemed as lovely as he was, and in the Salford rain, she invited Rani back for tea at their house. Putting the kettle on might not solve all the world’s problems, but that and a plate of oven chips and pizza appeared to be a good start.

Hurt is a funny thing; it is oten given without intention through ignorance as much as will. At a support group for EAL students, the calm and kind Murad stormed out when a Polish girl, upon hearing that immigration had taken his fingerprints on arrival, said it was ‘Like a terrorist.' His anger was coming from an angry place- how often had he had to endure insults based on his colour or religion, revolving around such words? Who could blame him for living on a hair trigger? But the girl herself was remorseful, explaining that all she meant was ‘they were treating him like a terrorist.’ Neither of them meant badly, and yet when lives are suffused with mistrust, bullying and victimisation, it is easy for common situations to appear menacing.

The lesson, I think, from such situations is to acknowledge that meaning well is often not enough; that we need to work hard to consciously avoid walking into such bear traps. But even as adults this is hard. And when worlds collide, as they so frequently do due to war, budget travel, migration, and the goad of survival, it is all we can do to be patient with one another, try to think the best of each other, and to, whenever we can, love our neighbours as ourselves. Even- or especially- when those neighbours are the alien.


A link to my reviews of series 1: Educating Essex can be found at the bottom of this post here: http://behaviourguru.blogspot.co.uk/2012/02/educating-essex-8-parable-of-good.html