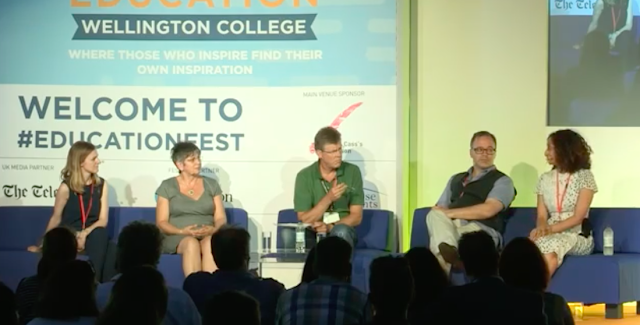 I took part in a fascinating panel for the Wellington Festival of Education last week. Myself, Laura McInerney, Maria Arpa and Katherine Birbalsingh were quizzed about behaviour in schools (watch it here). Within about two minutes lines were drawn and it was game on.

Of course any attempt to reduce anything as complex as human behaviour to a coin toss of possible answers risks bleeding it dry of the complexity that makes it a conundrum rather than a pop quiz. Do what you’re told, or do what you want? Compliance or defiance? Autonomy or lobotomy? A lot of debate about behaviour barrels around these poles like flies around a lampshade. They make better headlines than strategy.

The first question was ‘Is there a behaviour crisis?’ I would say it’s not obvious because the word is problematic. Crisis implies an emerging situation under so much pressure it cannot bear much more before it collapses or explodes. I think the behaviour problem is real, deep and tragic precisely because it isn’t that; in fact, it’s endured for decades and can continue to do so, gasping and grasping from the sick bed. McInerney mentioned Alasdair Campbell, who only considered it a crisis if the military had to be called in. (Perhaps we should be more worried by the Troops to Teachers program than we think?)

Katherine Birbalsingh, who can normally be counted on to barnstorm like Elijah, was as mild-mannered as someone with Xanax in their Special K. Turns out she was just stretching out like a Sumo. She broke into a jog when asked what the main behaviour problem was. “It’s not just TA’s being assaulted’ she said. ‘It’s the low-level disruption, You see them on the buses, and we’ve just come to accept the behaviour. '
'Children push,’ she said. ‘We push back.’ And I could hear her angry fan club on social media set their blog-phasers to ‘gnash’.

Maria Arpa said she thought children shouldn’t be expected to be just behave. They had to want to behave. This is certainly a laudable ambition. The obvious bogeyman to contrast this with is compliance, that pantomime villain of behaviour management. Compliance connotes so negatively, doesn’t it? Coercion, oppression, subjugation. It’s an egregious word the instant it tumbles from your lips.

The appliance of compliance

But I think we can reform it a little. For me, compliance is the first step in a ladder that takes children to extraordinary heights of habit way beyond mere slavish adherence to convention and into the realms of independently reasoned decisions. But before we can get there we need children, on those first rungs of maturity, wisdom and social awareness, to comply with moral rules, set for their benefit and the mutual benefit of all. I don’t discuss with a three-year-old whether or not to hit a peer while there’s any chance of it happening. No; at first, I forbid and prohibit, and explain why elsewhere. These combinations of prohibitions and admonitions become a set of habits, which become character. If these guidelines are good and useful, the child acquires useful and good habits of character, which are portable, and live on in them long after the teachable moments.

In fact, not to do this, and not to expect compliance, is a disservice to the child and an abdication of the precious duty we have to raise our children with every advantage possible. Sure, it sounds great in theory that we could reason our every ethical dilemma with children every time, but this misses two key issues. a) We only partially reason rationally. Much of what we consider to be our wise judgement, is an emotional response. And b) It just isn’t practical. What if they simply disagree with us? What if, after all our lovely discussion, children simply want to pursue their own self-interest? This is called the Free Rider problem, and is the reason why, even though it might seem in everyone’s interests to be good, so many people aren’t. If you were perfectly rational you might conclude that the wisest course would be for everyone else to be moral, and for you to be wily and wicked, and exploit the poor saps.

And this is why reason and patience alone will not make us moral. At some point, we simply need to instruct children to be so, and expect it, and alongside all the lovely conversations about kind hands and how do you think Tariq felt when you did that, there has to be oceans of you just can’t and because I said so.

Arpa said she wanted to get rid of behaviour management from teacher training, and half-jokingly I suggested that her wish had already been granted. Some providers do a great job, but there are still too many ITT platforms that de-emphasise behaviour management, or teach queer platitudes that are at best useless and at worst harmful: things like ‘try to make them laugh,’ or ‘There’s no such thing as bad behaviour, just a badly planned lesson,’ or one of my favourites, ‘Every behaviour is a communication,’ which might be true, but often what’s being communicated is ‘I fancy a bit of fun at someone else’s expense.’ It’s something I’m working to change, with the work we did as part of the ITT review into behaviour management training.

Do it- or I'll tell you to do it again

I agree that discussion is a more lovely way to encourage social behaviour than enforcement. But the simple, stark and stone-cold truth is that it isn’t an efficient way to run a community beyond two or three people. We all have very different ideas about right and wrong; we dispute every term imaginable, from justice to equality to good manners. If we left it to individuals to work out what each meant every time we needed to think about it, life would be a series of struggles that would consume our every instant.
Cultures thrive on shared understandings of what is meant by good conduct. Watch children howl as you apply one rule for one person but not for another. You simply can’t get students to all agree what the right thing to do is, even if you negotiate with them. For a start, some children will simply disagree about the rules of conduct, or lateness, or homework, if you let them co-create it. And every time you defer the responsibility of decision to a pupil you undermine the authority of the teacher to regulate and monitor the culture of the classroom. And that means you can’t keep them safe. It means you can’t provide what they need the most; a calm space where they know they are valued, free from bullying and interference, and free to learn and flourish.

Because what are consequences if not a way to show students that their actions matter? That they are not invisible? That someone cares about what they do? Some decry sanctions. Arpa calls them ‘Violence.’ My eyeballs almost spun in their sockets and my face made a very serviceable OMG GIF. This could not be further from the truth. She, and many who share her view, believe that systems based on rules and consequences breed violence; endorse violence; multiply violence. I think this stretches the concept of violence so far it snaps like a banjo string. If rules have no consequences attached to their infraction, then even the simplest of children realises quickly there is no rule at all.

Consequences are like the alarm bell that stops you reversing into a bollard on your car; an uncomfortable reminder that a poor choice is being made. There are many other reactions one can have to good or bad behaviour- sanctions and rewards are only two arrows in a quiver that quivers with possibility, from conversations, to meetings to education to interventions. But they are an essential- not optional- part of how we mould and help sculpt young adults into better versions of themselves.

Arpa is a sincere, intelligent and deeply caring person, committed to the well-being of children and adults. But these ideas are part of the reason why we have such intemperate and inconsistent behaviour in schools today. We train teachers not nearly enough in effective ways to anticipate and resolve challenge at a structural level. We offer no guaranteed training to school leaders who want guidance in creating effective school cultures. And far, far too much of the advice on offer where it does exist, is of this variety: that rules are oppressive, that children will thrive if only we granted them more and more autonomy.

Neither are complex enough to be true rather than merely pretty and pious platitudes. Children desperately need us; they need adult guidance. That requires us to be adults; to admit our responsibilities and take them seriously. Far too often we are advised in these matters by well-meaning people who have never had to deal with the reality of thirty, not a few children, in a teaching rather than a therapeutic context.

Teach the children you have, not the ones you want

There was a sensible question at the end. Could you run a society on principles of restorative justice? And of course, the answer is no. No society ever has. You simply can’t expect large communities to self-regulate through reasoned discussion. It would be lovely, but it’s a utopian fantasy. And the sad reality of utopias is that when they go wrong, it’s never the wealthy who suffer most, but the people it was intended to emancipate. Its why we have prisons and police rather than enormous voucher reward schemes for M&S.

Rules optimise justice and stability. Broken rules need to be mended and reinforced. People are imperfect. We can strive for a more perfect community, but not on a cloud of enthusiastic but impractical fantasy. In every teacher movie, broken urchins are healed by the love of a teacher who never gave up on them. That’s true, but if we don’t also teach them how to behave, then all we’re doing is hugging them into poverty.
Email Post