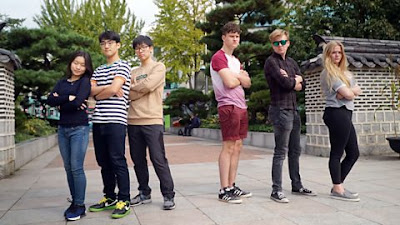 I say unusually, because schools on telly have a lineage like Argentinians with German surnames- there are bits in the past you want to forget deliberately. Belters like the aforementioned Educating Essex which managed to make school procedure watchable, but also forgettable stunt telly like Jamie’s Dream School*, which was hugely watchable but had as much to do with real teaching as…well, as this program’s theme song Kung Fu Fighting (an American song about a Chinese martial art) had to do with Korea. That was the most impressive example of ‘stuff it, that’ll do’ I’ve seen since we were reassured that Brexit did indeed mean Brexit.

But that was the only bum note in a program that kept its premise simple: what was it like for a British teenager to study in a Korean classroom? They dug up three great kids from Wales and re-potted them in two university schools in Seoul. Sarah, Tommy and Ewan were lovely. It would have been easy to Channel 5 the pitch by dropping in three crazy horses and watching the fireworks. But this eschewed the obvious legerdemain of conflict documentary, and for people involved in education, it was Boxing Day TV. My scientific device of ‘reading Twitter’ reveals that this was omnipopular with teachers, which probably means it’ll bomb out the ratings. Personally, I watched this and recorded Sherlock.

The Welsh/ Korean connection was of course because of their position on the PISA tables; in 2016 Wales came in between 35th to 40th out of 71 countries in reading, maths and science. Korea came in 7th, 7th and 11th in the same set, the giant swots. The top ten is dominated by east Asian territories like Shanghai and Singapore, Taiwan and Japan, Vietnam. You cannot move in Hong Kong right now for European Dorothys looking for the Asian Wizard of Oz. Meanwhile the Welsh welcome wagon for educational tourists still has the price tag on in case they want to return it.

Last year we saw an interesting counterpoint to this program: Chinese School: are our kids tough enough? (because you aren’t allowed ambiguity or subtlety in titles) also on BBC2. Five Chinese teachers took classes of 50 year 9s in Hampshire for four weeks and put them through a Great Leap Forward: pledges of allegiance, exercise, long hours and very, very teacher-led instruction. Some of the kids were digging tunnels to get out. Others loved it. But by the end something remarkable happened: students taught by the Chinese teachers achieved 10% higher results than their contemporaries. The head of the English school (who’d been betting on their failure) looked like he’d been asked to swallow a dolphin; the Chinese teachers were polite and serene. 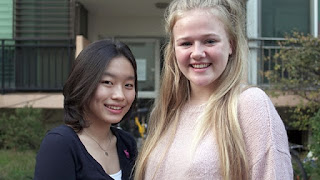 This time the foreign flowers were Welsh. The students were a credit to their families- kind, open minded and bright. Ewan approached it like a scientist; Tommy missed his Playstation; Sarah was worried about missing her lie in. Classes stretched on as long as there was daylight, and beyond. A succession of after-after-after school extra revision, catch-up evening classes, or Hangwans. No Crackerjack or Blue Peter for these stalwarts.

Tellingly, the Korean pupils were asked to sit a one hour GCSE Welsh exam in Maths; many of them nailed it in 15 minutes, saying it was easy. The teacher even described it as ‘Primary School’ material, just to rub it in a bit. We watched as the brave Welsh students even stumbled in English grammar lessons compared to their Korean counterparts. Which is unsurprising as most students in the UK think grammar is the answer to the question ‘Who was Little Red Riding Hood going to visit?’

Two systems, both alike in dignity apart from one of them

The behaviour difference was striking. Students in Korea simply didn’t misbehave; no talking over the teacher, no make-up, no texting, no chair-wars fought with flatulence, no WHY DO WE EVEN HAVE TO STUDY THIS, I’M GOING TO BE FAMOUS AND GET ON BIG BROTHER. Just oceans of self-regulation, hard, hard work, and long, long hours. I know that complex outcomes like educational achievements are the results of even more complex social inputs, but it’s not quantum physics to see that ‘sustained effort’ is the secret sauce behind at least some of the South Korean miracle.

Much has been made of the way these students are taught: lots of note taking, rote-learning and listening to the teacher at the front. Critics characterise this as boring, uncreative and mind numbing. Advocates point to what we know about learning; that we learn what we think hard about. UK lessons, marbled with group work and projects and card sorts and diamond nines and role plays about the Battle of Britain, dilute this effect.

Both systems, to mind, have deficiencies. I wouldn’t want either Welsh or Korean systems held up as ideal forms, but I’m happy to see them as case studies. The Korean achievement is extraordinary, and seems to emerge as much from their extraordinary culture of self-discipline, respect for education, institutions and a tradition of hard work. Educational tourism is often just cherry picking with Air Miles. To import Korean pedagogy without importing the culture from which it emerges, would be an exercise in futility (despite it apparently being the reach- for policy of many education ministers).

For extra marks, colour in the Buddha and tell me how you feel about it

South Korea, aware of the enormous pressure their system places on children, has started to look to the West to see if they can learn anything about creativity, collaboration and other shibboleths of European progressive education. I would say Caveat Emptor. Can you imagine 12 hour days where students had to rewrite Coriolanus in the form of a rap? Battle Royale would look like First Term at Mallory Towers. Tragically we see too many policy makers visit [current PISA titan x], then declare that all schools must do [PISA titan random strategy y]. This has accelerated since PISA became International Ofsted. Which is a shame, because while PISA data has a lot to offer, turning it into a league table of goodies and baddies is the worst thing to happen to education since TED talks.

But there are lessons for the careful, and some ideas can survive the journey from one soil to another. What could our Korean takeaway be? Longer hours perhaps- but not the harrowing Black Hole of joy represented by 14 hour shifts down the study mines; but perhaps schools could look more into an open all hours service, with catch-up and revision and nurture groups offered as a rolling, systematic, optional standard. I know some already do. Most school buildings stand empty for 2/3 of the year. What can we do with that?

Other things are harder to adopt. A robust respect for adults and teachers? That can’t be conjured up. Immaculate self-regulation, and laser-like work ethics? They can happen, but it takes huge effort from schools to build those cultures- which doesn’t mean we shouldn’t try. Indeed, the success of schools like Robert Clack School, Mossbourne Community Academy or Michaela Community School show us what is possible with almost any demographic when you turn a barrage of ambition and effort onto it. These schools forge their own cultures out of nothing but sweat and determination and hope. But it will be a long time before British culture celebrates the kind of virtues that Korea does- even if we wanted it to.

For me, the trade-off suggested was too expensive. One man revealed he worked 14 hours a day, six days a week to pay for the university school for his children. Which meant he saw his kids less than the average Fathers for Justice campaigner. That’s too high a price for me. I didn’t have children so that I could never see them. Plus, teachers get to be observed by parents, as well as being graded by other teachers and students. The Hell with that.

The realm of the possible

But this isn’t a binary option; we aren’t forced to choose between that and anarchy. Ideally we want our children to work smart AND hard so we can see them-  and see them flourish. The PISA top ten is dominated by the workaholic nations and regions of east Asia. But there are odd exceptions: The People’s Republic of Canada, or Finland (henceforth to be referred to as Funland).

And that’s even before we question the promise that PISA can define high performance in such a linear comparative way; that it’s judgements are sound; and that the conclusions it draws are sound, all of which are subjects for another feature (but I’ll summarise by saying that all of these provoke important caveats).

But what this program showed us is what is possible. South Korean culture is different to UK culture, but students’ brains are the same everywhere. No matter they do better than us: they work harder, for longer. Imagine how well students could do if they worked as hard, and lessons were taught using what we now know about spaced practice, interleaving and best practices in Direct Instruction, rather than just hard core lectures. There’s an educational national super tiger waiting to happen right there.

*I've blogged obsessively about these programs elsewhere on this blog, if you enjoy my partisan and slightly cranky TV reviews.