No hands up: remembering to count my blessings on the fingers you can

They say you don’t miss what you have ’til it’s gone. Last Monday morning, I lost the use of my hands. The full Double-Skywalker. At 6am I woke with my organic alarm clock baby Benjamin, and could barely lift him from his crib. Over breakfast we competed for who dropped most porridge. By noon I couldn’t fasten a button; by two I wasn’t capable of turning a key or a driving wheel without every crumb of my concentration. By three I was in hospital undergoing tests, bloods, X-Rays and ECGs; I could touch my nose but not scratch it; I could walk a straight line but not draw one. By six I could no longer sign my name, and when they released me at seven I only made it back in the car by treating my hands as spades rather than a prehensile Swiss Army knife.

Before that I’d gone far enough up the tree to meet the NHS end-of-level boss consultant, who puzzled over my symptoms before ordering a MRI. When I asked what diagnoses they were considering, they didn’t sugar coat it.
‘MS, possibly; or muscular dystrophy. Maybe a stroke.’

I know- good times, right? I’m almost carelessly optimistic, but there is an abyss in such moments from which it is quite impossible to entirely extricate oneself. I’m 44 and have three people at home I would not bear to see hurt in any way. Nothing at that point offered any kind of positive angle; there was little to make the most of there. From a day where I was expecting to plan some lessons and pick up my kids, I was now considering the best ways to spare my family any further hardship. They sent me home with a caution to return if things got worse.

Next day they got worse. I could barely hold a tissue, and I had to be driven to hospital this time, where they brought the MRI forward to the next day. By now I couldn’t pick up my ten month old boy without using my arms like chopsticks. With a lot of time on my hands but no hands with which to spend it, I was glad of social media, and big screen buttons I could tap with a claw, as I could no longer use a keyboard. I had to shower like a bear standing in a stream, and I slept that night in dread.

Thursday I checked in early for the MRI. If you’ve never been for one then I can only describe it as the worst theme park ride ever. On House it looks like a bed in a 25th century travel Lodge. In reality it involved headphones, a neck and face brace to keep you still so you feel locked in, before you were loaded into the white plastic chamber like a flesh bullet into an enormous six-gun. ‘Would you like some music?’ asked the radiographer. ‘We have Youtube.’ I declined, on the grounds that if things went badly I would not only end up in a wheelchair, but I’d ruin a perfectly loved song in the process.

An hour and a half inside a tubular coffin listening to what I can only describe as the Philip Glass and Brian Eno having a knife-fight in the BBC sound effects cabinet; as Koyaanisqatsi raged around me ninety minutes crawled by, and the machine clattered and crackled and I clenched my teeth in case my crowns flew out, no matter what the radiographer said. My mind wandered to a childhood certainty that I had swallowed a five pence piece that never saw daylight. I wondered if it would tear itself through my navel like Geiger’s homunculus.

Another three hours waiting for a neuro consult to tell me if I needed to get ramps installed, and how long I had before they made an inspirational movie out of my life. I’m joking, but then, I was shaking.

Finally, the neurologist, who asked me to sit down in what I’m sure was a gesture of civility, but to me foreshadowed nothing but doom. He passed me a piece of paper:

‘All clear,’ Mr Bennett. ‘How do you feel?’ How did I feel? Like I’d just been handed my whole future back; like a piano hit the spot next to me on the pavement; like the luckiest son of a bitch ever. I felt alive. Alive, when I thought I was staring down the barrel of a gun for the next twenty years, withering before my family’s eyes.

He couldn’t say what caused it- a virus possibly, or an electrolyte imbalance, but whatever it was, it was lifting, and had started to recede that morning slightly. In the hospital cafe I tried to dent a can in my grip; I still couldn’t, but I could hold it. I could hold it. 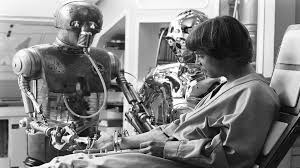 By now I can type again, although my fingers feel like someone tied a roll of pound coins to each knuckle. My signature looks like my wife made my kid sign a father’s day card. I can shave again. I got my hands back.

Few things grieve us more by their absence than by the loss of something simultaneously vital and monotonously reliable; the metronome of your heart; a parent; a place to sleep, a stable job. We take so much for granted, and it’s no revelation to say that our health is overlooked every second until it starts to elude us. Until this week, the question of the United Kingdom’s place in Europe, or even it’s own constituent parts, was of no concern to me; now it feels like a trunk full of rubies hanging over a smelting pit.

I returned to work today for the first time in almost a week, a wall of catching up circling around me like sandbags, things to be done, emails teeming and squawking to be released and fed. None of that mattered, at least for that moment, at least until I forgot what I had almost lost again and life got in the way of appreciating life’s bounty. I think that is one of the great pivotal lenses of adulthood: the ability to appreciate what you have at every point, which is one of the palpable lessons that being in the moment attempts to teach us. As children, we know only the baselines of our own culture and privilege. I never understood what my parents gave me until I tried to give it to someone else, for example. Sometimes we have to lose something, or risk losing it, to value it. It’s a hard lesson to teach students but we must, or they’ll squander riches they assume are indestructible and eternal, like freedom of speech, or the right to travel, or learning.

Ask any pilgrim how it feels to find a shower and a bed after three weeks on the road to Santiago.

That’s how I feel today. I feel grateful. And, I feel alive.

As a token of that gratitude, I made an offering to the Gods of Hubris via this website, and if you were so inclined feel free to do so too. You will have your own pilgrimage.
Email Post