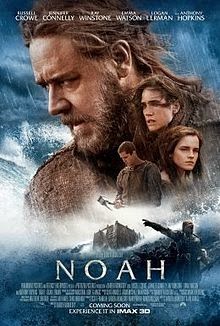 Would you Adam and Eve it? Hollywood is flirting with the Bible again. In a culture where the salons of mainstream media are devoutly secular, religion finds it hard to get traction. But there is undoubtedly still a huge market in the temple: Gibson’s Passion of the Christ turned water into Cristal by marrying two audiences: those looking for powerful, operatic narrative, and those for whom attendance is a form of worship. To date, it’s grossed over $600 million, which is a lot to render unto Caesar.

Gone are the days when sword and sandals epics like The Robe and Ben Hur could rattle their rosaries with impunity; post modernism demands that we now deconstruct religious films in a way that satisfies the impulse to rationalise. There is an almost absurd tension in a cinematic culture where giant robots can wrestle metadimensional alien conquerors without examination, but any film that depicts say, the miracles of the Talmud has to have its papers stamped and wear its piety round its neck as it waves a bell, warning the unwary.

So, to Noah. Russell Crowe is, by now, the master of these kinds of muscular patriarchs, part Liam Neeson, part Maximus Decimus. He occupies the role beautifully. Darron Aronofsky, one of Hollywood’s most interesting directors, wields the megaphone. His The Fountain  (one of my favourite films in the last decade, and I suspect I may be alone in the world when I say this) showed he could do mystical transcendentalism. The Wrestler showed he could do brawn and blood and burly men out of step with their times.  I don't know what Black Swan showed. This is film with, really, four actors: Crowe, agonising, and sawing, and submitting in sequence; Ray Winstone playing Tubal-Cain, the serial villain; Anthony Hopkins, playing Methuselah as a senile Welsh Gandalf, a role he has been contractually obliged to play since 1993; and the Ark, in a welcome return to our theatres since Evan Almighty.

The Genesis account of Noah is spartan to say the least. Aronofsky’s used it as the napkin script for the IMDB Noah. The contrast is interesting. In the non-CGI Flood Narrative, Lamech, Noah's father, fathers him when he is 182 years old. You heard me. And far from being couponed by Ray Winstone’s Mespotomian gangster Tubal, he somehow struggled on for a mere 595 more years. Barely enough time to boil a pomegranate. And Noah, as the last of the antediluvian ubermensche, begat his three kids when he was 500. You also heard that right. I know some couples have a honeymoon period between getting married and starting a family, but that's positively lethargic, him and Mrs Noah (never named in the Bible, natch) gettin’ busy for half a millennia.

The film swivels and hinges on a theme that is suggested by the Spartan Mosaic account but rarely developed: environmentalism. Noah appears on the screen as the world’s first Greenpeace activist, almost Hindu in his reverence for every thing that creeps, grows and respires in any form. He even scolds his son Shem for picking a Daisy, which in a world parched and blasted by sin, seems pretty small beer to get anxious about. And he’s vegetarian! This sits uneasily with Genesis Noah, who not only filled his Ark with animals two by two (except for fish, dinosaurs and unicorns- they could fuck off) but actually brought in pairs of animals that were not clean to eat and seven of the ones that were good to eat. It wasn’t an Ark, it was a goddamn larder. But I liked Soya Noah. I wonder if he, too, had allergies, and caused problems when everyone split  the restaurant bill?

I have to mention the Watchers. The Watchers are very odd. It’s like the Never Ending Story met The Seventh Seal. In the Bible, the ‘sons of God’ (angels) ‘saw the daughters of man and saw that they were fair’ (comedy whistle effect) ‘and they took them wives of all they chose.’ AMIRIGHT, ANGELS?. The children of this controversial system of matrimony were ‘giants of the earth’, although after that there’s no mention, which seems a bit remiss. The film doesn't miss the same chance, making them, essentially, giant stone ents, hroom-hrooming around the script, teaching men how to build steam engines and iPads, supplying cheap immigrant labour for ark-building (they come here, taking our women, doing all our jobs for free) and giving Aronofsky a chance to add the Battle for Helm’s Deep into the Flood narrative. Initially they capture and threaten Noah Then they join forces with him against the evil king. And I realised where I'd seen this before: Flash Gordon. Hroom.


Emma Watson acted rather than inhabited her invented role of Ila, presumably created to prevent audiences wondering, as primary children automatically have since time began, if everyone in the Bible had incest for dessert (fundamentalist answer: yes). Barren land, barren wombs: the theme of fertility grew ripe throughout the film, as the sterile Watson anguished about her infertility (which was touching), and the eco-theme hammered home the idea that humanity had poisoned the earth with the sin of their industry and avarice, and old Noah determined that God had decided all humanity should perish for its wickedness…EVEN THOUGH HE MADE NOAH BUILD AN ENORMOUS  GODDAMN ARK THAT WOULD SAVE HIM.

This led to one of the most difficult and almost successful inventions of the story: Noah becomes Bad, Red Kryptonite Noah, determined that Humanity shouldn’t  survive past his family’s life spans (which would only be, oh, 900 years or so, probably. Hardly worth getting out of bed for, really). It’s a dangerous gambit, to turn your protagonist into a monster in the third act. That’s fine for a plot twist in Scream VII, but less so if you want to bring your audience on the character journey. By the middle of the third act, I, and probably many others, was checking out on Noah and rooting for Winstone’s cruel, arrogant tyrannical- but specifically, not infanticidal- Tubal to bury Crowe.

It works…just. But only because Crowe follows in the Biblical  tradition where God instructs that Abraham to sacrifice his son Isaac as a test of faith. The God of the Old Testament, it has to be said, does not mess about with cuddles. In fact, Genesis begins with one of my favourite lines in the Bible, Genesis 6:6- ‘And it repented the LORD that he had made man on the earth, and it grieved him at his heart.’ Let that settle in: God repented. He regretted something he had done. That’s an astonishing quality to ascribe to a perfect, and therefore changeless being.

And then, in a moment of ghastly tension that was difficult to watch, Noah goes to butcher the children that he believes represent a defiance of God’s genocidal will….and fails. Or rather he succeeds, feeling only love as he looks at their wee faces. I was watching through my fingers. Even Abraham didn't have t go through with it in the end (with the Angel Michael jumping out at the last moment shouting PUNKED at Abraham, and I bet he and Isaac laughed about it all the way home, right before Sarah his wife turned his balls into a purse. Watson's final scene with Crowe was unexpectedly touching, and the whole character arc, and plot, rested on that gentle moment of mercy.

It’s a film that divides, of course. Many Christians still believe in the literal truth of the Flood narrative (although ti’s worth remembering that most churches, including the Catholic and Anglican churches, long ago accepted evolution and the Old Earth theory of the Big Bang as the most probably stories of creation), and in America (of course) there were accusations of impiety and blasphemy (most amusingly, by several Christian groups that hadn't actually seen it yet. WHAT DO WE WANT? WE HAVE NO IDEA. WHEN DO WE WANT IT? etc). Aronofsky sneakily slips in the six day Creation of Genesis 1 in a CGI sequence that clearly apes the Big Bang and the evolution of the species in a way that would make the History Channel proud.

It’s been banned in several of the Muslim states, although that’s hardly remarkable when you remember that the depiction of any prophets in film or picture is considered sacrilege. And it has coined it in, already making almost $350 million at the Bronze Age box offices. Noah has made his Ark deposit back.

It’s a triumph for many reasons, despite its Biblical length and supporting actors so arboreal you could make a mast of them. For one, it’s something that Aronofsky does well that few Big Tent movies do in the popcorn shops: it drags creation themes, religion, faith, mercy, sin, stewardship and dominion into what is in turns an action movie, a family saga, a getaway, a history narrative and a parable. It’s not often Hollywood does Big Ideas like that. And it does so in a way that mimics Cameron’s ability to tell vast, cosmic stories through the lens of a few characters. Noah the film is like the Ark itself: improbable, vast, heaving under its own weight. But it floats. Better, it sails.
Email Post