Silence, the death of activism. Why Troliday defeats its own purpose. 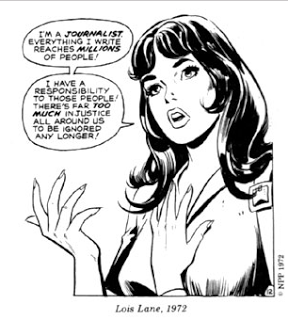 If you're a Twitter user in the UK, you can't help have noticed that it's Troliday today. This is the latest crest of a wave of protest currently ebbing and rising in response to a particularly grisly series of high-profile misogynistic attacks on, among others Mary Beard, and many other women who have the temerity to be too high profile and successful.

The aim of Troliday is for users to spend 24 hours away from Twitter in an act of solidarity and as an attempt to persuade Twitter to police its badlands more carefully, both of which are perfectly noble goals. But I can't find enthusiasm for Troliday. I think it's self-defeating. I think it's a good cause but a bad strategy. Many of my reasons have been exhaustively described already throughout the day, so I'll reiterate briefly:

1. To paraphrase the NRA, if we silence ourselves, then the only people left who get to say anything are the ones with the complicated and unresolved childhoods.
2. A boycott only works when withholding your services or goods actually hurts the organisation targeted. If a handful of people in the media decide to withhold their Sunday sermons, life very much proceeds as it was.
3. When you battle an idea, you need bigger ideas to win.

Memes, and the battle for the bigger idea

I'll explain. For most people, a meme is a recurrent internet funny, like the scowling cat, the Facepalm of Picard, or Gandalf telling some unlucky high-schoolers that they shall indeed, not pass. But the term was coined by Richard Dawkins in his book the Selfish Gene. As opposed to the gene, which was a unit of genetic inheritance, a meme was a unit of cultural or intellectual capital that could be passed on to other members of the species. The important thing was that memes acted like genes: if they offered a survival advantage or some kind of utility, they would replicate successfully and propagate. For example, the habit of washing ones hands before eating has a benefit, and so survives, whereas the practice of trepanning does not.

What excites those who study memes is that it's a model that can usefully describe all kinds of cultural processes. Communism is a collection of memes, as is Capitalism. So is Coca Cola, and Apple, and Hula-Hoops, and social networking, and ... anything that we do. Gangnam Style is a meme that acted like a virus before exhausting itself, having consumed its host, gratefully.

And that's why it's important not to stay silent. Unlike World WarII, this isn't a battle against an enemy with clear ideological and geographical boundaries. This is a contest of ideas. On one side (and I abhor the linear description of two poles, but it'll do for explanation) is the idea that women are objects that exist as a helpmeet to man; on the other, the idea that they are not, that they deserve every privilege and consideration that their male counterparts enjoy. On the first side we have the glass ceiling, the male gaze, patria potestas, feet binding, and the fear of weak men who cannot sustain a reasonable erection without constructing women as vile whores. These are ideas.

On the other side, we have universal suffrage, No means No, Dworkin, Wollstonecraft, Greer, the Equal Rights Movement and JS goddamn Mill if you please. These are other ideas. These ideas are in constant battle with each other, in abstract or concrete battlefields, shifting every day, taking place in new theatres every moment. Justice of any sort will not appear by itself, unless you believe that it exists as a natural commodity, which I do not. It must be constructed. It must be created, constantly, from the atoms of chaos and disorder that constitute our moral universe.

So I cannot conceive of silence in this context. Silence is an abdication of responsibility from wrestling with other ideas. Other than the idea behind the silence, which isn't entirely without merit, the silence itself is a vacuum of ideas. It is the absence of ideas. It is shadow. It is darkness. The only ideas that are left to replicate are the ideas of unhappy and fearful men, cupping their timid viscera and congratulating each other.

How should we conduct ourselves in this arena? By speaking. The internet has bred courage in men who would previously have lived lives of desperate anonymity. The cure for their candour is exposure; confrontation; the spotlight of infamy. Mary Beard so deftly demonstrated this when she was party to the exposure of one such braveheart, whose bawdy boldness stopped at the point his mother found out.

By all means, let Twitter design methods that ease the process of exposure and reporting; they profit from our participation, and should be held responsible for good governance. I couldn't organise a car boot sale without making sure my participants were reasonably safe from harm, so let them spend some money on their algorithms and customer care advisers.

And culture needs to start catching up with technology. When people start to realise that a threat to kill and rape becomes a published artefact once you press send, and redress can be legally sought against it, then they might think twice before airing their vile opinions beyond the pool tables and bars of privacy.

But the biggest weapon against these cruel, selfish and exploitative ideas, is better ideas. Police are essential, but it isn't only police that make out streets safe. We have to reclaim the streets ourselves, police our own corridors too. I cannot change the whole world- no matter what some journalists with odd ideas of their importance think- but I can do something about the spot right in front of me. Any garbage that appears in my timeline gets questioned, just the same way that I'd cross the street to help if an old lady was being hassled. That's something we can all do.

So I can't condone silence. It isn't the non compliance of Rosa Parks, or the Salt Marches. It's cargo-cult activism; it apes activism, but it does nothing. It's activism with no calories. Worse, because it temporarily satisfies the pang for justice, it actually denies justice the opportunity to be performed.

Finally it hasn't been helped by the slightly smug way in which a few of its proponents have implied that their absence would somehow end Twitter.  In fact, for that alone, perhaps the silence served at least some small purpose. Self important, self-elected salons are another idea entirely.
Email Post