The Importance of Being Santa: A Christmas Carol 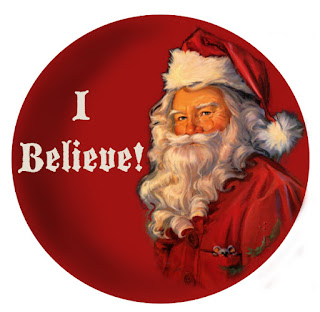 Yesterday, because I am both Grinch and Gandalf, I taught a year 7 class about Santa Claus instead of the traditional first 45 minutes of Big Momma's House and Quality Street clusterbomb. As the rest were answering questions on Father Frost and Sinterklaas, one little girl put up a hand asked me in her secret voice, 'Do you think Santa Claus is real?' Her brow spoke of the cares of youth; her question suggested she was on the trembling verge of adulthood. Nothing was more important than this.

The Search for Santa

Who is Santa Claus? Most people know the jolly late 20th Century incarnation, broad of belt and prodigious of present, blitzing around the world in a single night of magic. But like Madonna or Doctor Who, this is only the latest in a series of regenerations. The 4th century St Nicholas of Myra, in Turkey, is the primary source. His parents died young, and the inherited fortune allowed him to embark on a life of philanthropy, like a Turkish Bruce Wayne: his first act of kindness involved saving three children from prostitution and slavery by providing their dowries (dropped down into socks, drying by the fireplace, giving us oranges in stockings). Already, we see St Nick as a patron and protector of children against the predations of adult expediency.

Then it gets crowded. Many European countries already had mid-Winter festivals, as an act of defiance and hope against the darkest, deepest time of cold, dark and death. In England it was called Yule, and lasted days as communities feasted with what they could save. Later, Christianity rescheduled it to coincide with the celebration of Christmas. This Germanic festival celebrated Odin, and his Wild Hunt across the skies. And many countries developed a remarkable number of mythical figures who represented this time of Solstice. In 17th century England, for example, it was Father Christmas, a merry man who is probably most familiar to modern minds as one of Scrooge's cautionary spirits in Dickens's classic A Muppet Christmas Carol.

These figures started to merge as the world grew smaller, until the Santa Claus meme ate the planet entire. Some countries still hang onto their Father Frosts, but it seems that any nation with 3G now views St Nick, Kris Kringle, Father Christmas and Sinterklaas as the same guy who brings Coca Cola to our TV screens in the first week of December, giving everyone an ironic thrill on Twitter, and giving the shareholders of Coca Cola even more of a thrill. (Incidentally, it's a myth that Coke had anything to do with the modern portrayal of our jolly benefactor, although their marketing dollar undoubtedly had an effect on popularising the already existent image. Santa's had a red suit all the way back to St Nick.) A lot of the mythology arrived in the late 19th and early 20th centuries, in the form of poems and songs. Santa Claus is Coming to Town gave us naughty and nice lists (and you thought they came from the Renaissance, didn't you?), and Rudolph the Red Nosed Reindeer gave us...well, you know.

So what? Well, it gave me pause. Santa's been around, with different passports for centuries. Ideas don't last like that unless they have meaning and value for people. And it isn't just to sell Barbies and Smart Phones, although it undoubtedly also does that. Santa was always about helping people who needed it, not choking spoiled children with Transformers and chocolate. He went where he was needed. He represents a great spirit of pure benevolence; of love and life, no matter where or for whom. Notice his sleigh crosses the world in a night, invisible to radar and satellite. Every child anywhere who needs him is his charge, in war or peace. This is why he endures in the hearts of children and the scarred, scared hearts of adults who no longer dare to dream. Because he represents, past the adverts and the cynicism, the antidote to hopelessness and despair.

Most of us no longer believe in the man, because we were disappointed by the world, and its inadequacies, by its squalor and its suffering; by the lack of any evident cosmic justiciar; by the relentless way it crushes the kind and the gentle. This is rarely more clear than in the year of Savile, when modern protectors of children have been revealed to be the very worst of their enemies, when children are exposed to escalated sexualisation daily through advertising aimed directly at them.

There is a reason why he is immortal; because, like the Olympic Gods, he embodies something within us that, thankfully, always endures: the spirit of hope and love. As teachers, we need to remember this Pole Star. We are small but important links in the chains of their lives, with a professional part to play. Teach to the best of our ability; act as role models as much as possible, and and treat everyone we encounter with compassion and altruism (even if they don't understand or appreciate it at the time). As tears fall throughout the year, Santa Claus is working away to make toys for the desperate. And every time one of us commits an act of charity and benevolence, you can hear the hammers of elves and the tinkle of bells. At times it seems that humanity's factory settings are cruelty and selfishness. And at times, it does not, and for a night, we can imagine that something better is possible.

So I answered her as honestly as I could. 'There's no proof he exists,' I said. 'But maybe he's real in a way if you believe in him.'

And that seemed to satisfy her.