It's Clobbering Time! Get ready to open up some cans of Whup-Ass.

'AT LAST! TEACHER IS BACK IN CHARGE'

'Disruptive pupils who wreck the schooling of millions will be given an 'unambiguous lesson in who's boss', the Education Secretary vowed yesterday.

And doesn't that sound splendid? I like the use of the word 'vowed'. It makes me think of Batman at the grave of his parents, waging a mad war against PC Educational super-lefties (The Pen-Pusher? Two-Chance?). How is this game-changing turnabout to be achieved?


'In a new war on ill discipline in the classroom, Michael Gove will loosen rules on the use of physical force by teachers and increase penalties for parents who allow their children to play truant.'

So far it's sounding like knuckledusters and Kevlar Equalisers. I'm imagining Heads of Learning sitting like spiders at the heart of an enormous CCTV Panopticon, and corridors equipped with head height trenches of ANSUL riot foam dispensers.

But soft! Teachers ALREADY have the right to use 'reasonable' physical force in order to prevent a crime being committed, and in order to prevent substantial disruption to a lesson. The word 'reasonable' will be decided in a court, of course, which is entirely proper- no rule could regulate every human circumstance. But the point is that these powers aren't new. Of course, many teachers are unaware of this, and I think it's fair for teachers to be trained in what they can and cannot do. But teachers must get over this ridiculous phobia that if they, for example, put a finger on a pupil's shoulder to direct them back to work, then they are guilty of assault.

Then he carries on with these measures:
This is a bit odd isn't it? If you need to restrain someone, you need to restrain them. Worrying about filling out an incident report later isn't going to affect that, unless you restrain people, like, ten times a day. It also seems proper that a teacher should have to record these things- if I had a child who needed to be restrained physically (as opposed to verbally, I suppose) then I suspect I'd like to know about it formally.
Fine, so long as there are exceptional clauses where the parent can prove that an effort has been made.
Is this the real issue? Yes, primary schools are packed with women- when I passed a primary stand at an educational recruitment fair a few years back, I was nearly drugged with a hypo and kidnapped- but surely the proof of this as a lack would be significant differences between the acknowledgement of male vs. female authority in secondary schools. Has this study been done? My experience tells me that gender doesn't play a huge role here- what matters is how teachers conduct themselves.
This was announced some time ago- still, it's a welcome
Again, nothing new. Despite the fuss this caused when first announced, this will have a relatively small impact on how schools currently conduct themselves.  It just means that schools will have to define, in advance, what they consider to be  prohibited materials. I suggest the Daily Mail.
This is the one big opportunity lost. I cautiously approve of some of the behavioural reforms, but this one, the biggest one, is an inexplicable fumble. It's terrific that Heads can now exclude, with no threat of some frilly-knickered Governing body getting all misty and over ruling it (do you know how HARD it is getting a pupil to this stage now? Any school body that over ruled the Head at this stage should be invited to teach the buggers for a fortnight and see what they can with them).

But now schools will be expected to FUND the buggers in their NEXT school. Sorry, I try to avoid cheap, capitalised emphases, but reading the Hate has given me a taste for it. That's the kiss of death to exclusions in all but the most desperate cases, as schools are, despite their similarity to dream factories and fairy republics of hope and optimism, run on money, just like everything else. If you reduce every exclusion to the blunt, fiscal skeleton of 'He's worth five grand', then you won't se many of those happening.

That's bad enough, but the real kiss of death is the idea being floated that the expelled student's final KS4 results will be counted as part of the expelling school's pass-rate statistics. Excuse my capitalisation, but DUDE? ARE YOU ON DRUGS? There can be no academic reason for this CBeebies bit of logic- it's clearly a punitive measure, designed to deter exclusion.

Both of these flaws aren't just minor weaknesses- they're deal breakers. Exclusions should never be lightly arrived at, but sometimes they are the right thing to do: not the last resort- the right thing. Just as a community's penal code sometimes requires the sanction of 'Go to Jail', school sanctions need to go somewhere- there has to be a terminal point, and it has to be something that stings. It has to be serious. It has to mean something. If you remove this terminus, then you collapse all behaviour measures that precede it, all the way down to the five minute detention. Because why would a student turn up for even that, if he knows that, with persistence, all privations can be evaded? And some students are very tenacious indeed.

And it only takes a few to ruin a classroom, and to reduce school discipline to a  constant battle to put out fires. Only a few. 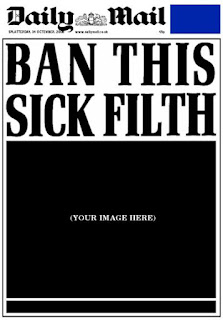 Cheers, for that. This is actually a good one. You know all those people who huff about, 'Oh my little Barney can't walk home in the dark, how awful,' you know them? You know what I suggest to them? Their kids shouldn't be mucking about in schools and getting detentions. How d'ya like them apples?

It is odd how the Daily Snail decided to put a fire under this one and blow it onto the front page. It's like announcing that the Tories 'disapprove of nationalisation' or something. Still, I'm sure they know what they're doing.

As I say, I welcome any measure that seeks to restore the authority of the teacher in the classroom. So here's my three part plan, in case anyone wants to know:

I repeat something I say often: there is no contradiction between setting boundaries and compassion. In fact, when it comes to raising children- when it comes to teaching them- the two are inextricably linked.

And don't get me started on the Troops to Teachers thing...