Inquisition announces new 'no-warning' policy: schools 'not expecting' it.
In a formal announcement today, the Grand Inquisitor or Her Majesty's Inspectorate revealed plans for 'surprise trials' for all baptised Christians of Spanish origin and any school covered by the Education Act, 1988. Miriam Rosen, the interim Inquisitor said that this would end the current practise of schools concealing heretical activities and breaches of Department orthodoxy.

'The catechisms of best practise are there for a reason,' said Ms Rosen, standing in for Tomas de Torquemada, the previous Head. 'Mainly so that we know who to burn at the stake and who not to.'
Answering allegations that the dawn raids implied that schools had something to hide, Ms Rosen was characteristically unrepentant:

'Of course it doesn't. The innocent, pious mainstream majority have nothing to fear. But anyone attempting to conceal any one of the seven deadly sins with the illusion of good data management...well, let's just say that the auto-da-fé is just one of the many options we have; also, notices of special measures, but mainly auto-da-fé .'

'By testing out unannounced monitoring visits, we will see if there is even more we can do to help schools address behaviour problems: for example, immolation. Teachers will be encouraged to confess their sins, before being taken in procession through the town, until they reach the quemadero, or burning place. At that point they find out if they were graded satisfactory, good, outstanding, or damned forever in the fire that gives no light.

In an article in today's Witchfinder Times, it was reported that there were rumours that Michael Wilshaw, Head of Mossbourne Monastery in London's deprived diocese of Hackney, would step into the Grand Inquisitor role.

'We will have three weapons in the battle to reclaim schools as educational spaces,' he said recently. 'Consistency, uniform, discipline and clear leadership.'

Brian Mendicant, a teacher who asked not be named, said last night, 'I wasn't expecting this.'

New Teacher Standards hailed as 'Whiteboard Revolution'
Teachers filled the streets last night in tearful thousands as the news was announced that teacher standards would be include 'tolerance' and 'respect.'

'Thank God, thank GOD,' said one jubilant teacher, 'This is what we finally needed after all the years in the wilderness. Now I know that I am supposed to both demonstrate and encourage basic manners and civility. Previously I wasn't sure if I could swear at them, or call them little sh*ts, but now it feels like the scales have fallen from my eyes. Hallelujah! Can I kiss you?'

The New Standards were launced in response to criticisms that the old standards were old, ambiguous and vague.

'These will be new, ambiguous and vague,' one government spokesman assured us. 'For example, teachers will be required to uphold British values. Do you know what that means? No, me neither. It might mean getting flustered in a queue when someone doesn't have the right change. Or then again, it might mean marching into someone else's country and strip mining it. See? Something for everyone.'

He added, 'Teachers should make sure their personal beliefs "are not expressed in ways which exploit pupils' vulnerability".' This finally clarifies the position that teachers must take if they, for example, feel tempted to tell small children that stealing is wrong, or that peeing in someone else's shoe might be a bad thing. Clearly, the child must decide for himself if such matters are right or wrong- top-down, prescriptive brain washing must be seen as directly contravening their rights as guaranteed by the Geneva Convention.'

'You are extremely welcome,' he said, before leaving for an Idea-Shower to rewrite the American Constitution in Trustafarian patois, and updating Delia Smith's instructions on how to boil an egg.


The Learning Environment: there are BALLS in your MOUTH 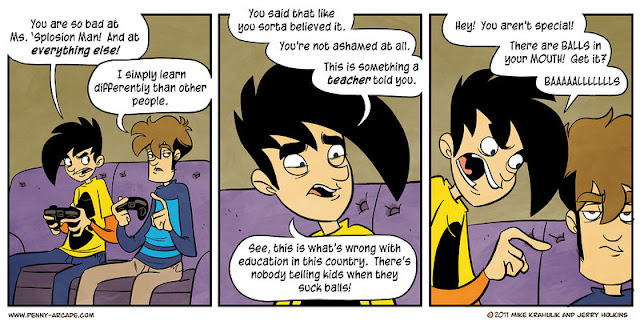 With thanks to Paul Anderson for providing the link to the excellent Penny Arcade..
Email Post
Labels: Michael Wilshaw OfSTED satire Standards